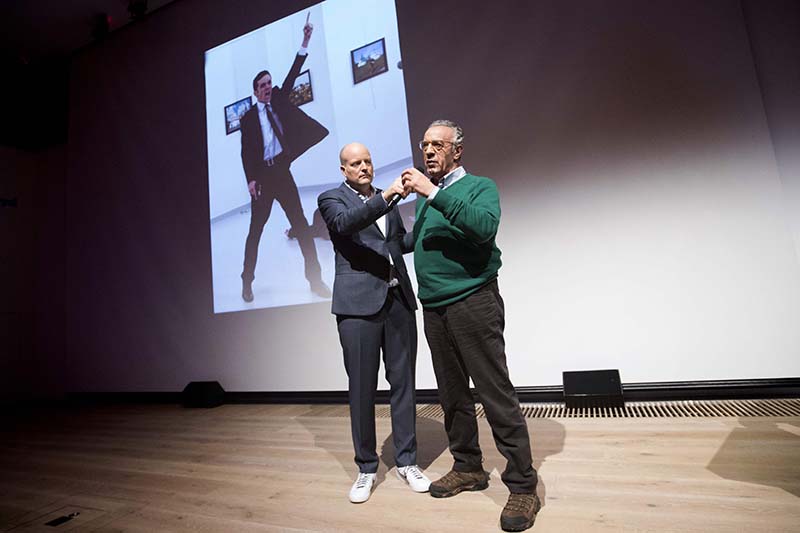 Winner of the World Press Photo 2016 photographer Burhan Ozbilici (right) and Managing Director of the World Press Photo Foundation Lars Boering, speak on stage during the announcement of the World Press Photo prizes in Amsterdam, on February 13, 2017. Photo: AFP
THE HAGUE: Brandishing a gun, his face contorted with rage, the shocking image of an off-duty Turkish policeman assassinating the Russian envoy to Turkey Monday won the prestigious World Press Photo Award. Judges praised the bravery of Burhan Ozbilici, a photographer for the Associated Press, who stood his ground as 22-year-old policeman Mevlut Mert Altintas pumped nine bullets into ambassador Andrei Karlov at the opening of an Ankara exhibition. Altintas shouted "Allahu Akbar" ("God is greatest") and "Don't forget Aleppo" as he opened fire, vowing those responsible for events in Syria would be held accountable. "From the moment I heard the shots I knew this was a historic moment, very serious," Ozbilici told AFP. "I knew I had to do my job. As a journalist, I couldn't just run away to save my skin." The powerful photo went viral and has been viewed some 18 million times. Judges from the World Press Photo Foundation in Amsterdam acknowledged it had been tough to choose the 2017 winner from over 80,400 images by 5,034 photographers from 125 countries. "It was a very, very difficult decision, but in the end we felt that the picture of the year was an explosive image that really spoke to the hatred of our times," said jury member Mary Calvert. Agence France-Presse also scooped three awards. Manila-based photographer Noel Celis took third place in the General News category for his photo of inmates trying to sleep in an over-populated prison in the city. Syrian snappers Abd Doumany and Ameer Alhalbi won second prize in the Spot News category for pictures of children caught up in the bombardments of Aleppo and Douma near Damascus. It is the second year in the row that Doumany's work has been honoured by the World Press Photo foundation.

But the winning photo sparked dissensions on the jury, with president Stuart Franklin, a British photographer, saying: "I voted against. Sorry Burhan." "It's a photograph of a murder, the killer and the slain, both seen in the same picture, and morally as problematic to publish as a terrorist beheading," he wrote in the British daily The Guardian. He argued that "placing the photograph on this high pedestal is an invitation to those contemplating such staged spectaculars." Ozbilici, who covered the failed coup bid in Turkey and been sent on mission to Syria, Libya and Egypt, said he always tried to be ready for difficult tests, "to have the courage to confront a world which has been made rotten by the dishonest and corrupt, in order to try to do some good." He said he was sorry for the death of the envoy, whom he described as a "natural, kind, sincere man" whose death was a direct consequence of the "Syrian catastrophe." "This photo marked an important moment in the history of Turkey, especially in its relations with Russia," said Ozbilici, who has worked for AP since 1989.

Jury members agreed his photo captured an important moment in time. "Right now I see the world marching towards the edge of an abyss," said jury member Joao Silva, referring to Altintas as a man who had "clearly reached a breaking point." "This image to me talks" of everything that is happening across the world. "It is the face of hatred." A total of 45 photographers won awards across eight categories, touching on a vast array of subjects -- from racial tensions in Louisiana to walls built around the world to thwart migrants. Jury member Tanya Habjouqa said the choice of the 2017 winners was "bold". "I think the selection is definitely going to push forward a debate and I think it is a debate that is essential to have," she said. The competition itself was directly affected by the travel measures brought in by US President Donald Trump, when one of the nine jury members, Palestinian Eman Mohammed, cancelled her trip to Amsterdam. Amid the chaos unleashed by the ban, she decided it was too risky to leave her young children in the US where she lives, fearing she might not be allowed back in again.
#Photo exhibition #Amsterdam #US President Donald Trump #Andrei Karlov #Turkish policeman #Burhan Ozbilici #World Press Photo Foundation #Mary Calvert #Noel Celis #Ankara exhibition
You May Also like: