India tries to hasten US defence deals amid election uncertainty 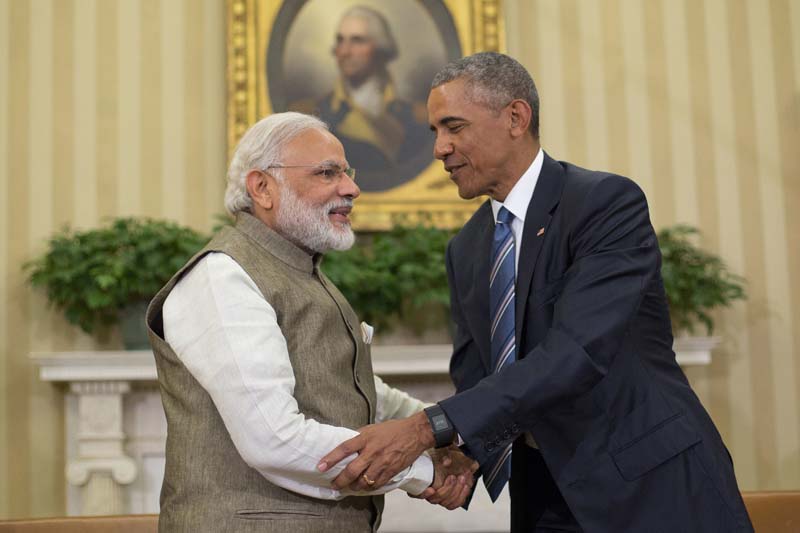 US President Barack Obama and Indian Prime Minister Narendra Modi shake hands before their meeting in the Oval Office of the White House in Washington, on June 7, 2016. Photo: AP
NEW DELHI: India is trying to hasten a deal with the United States to buy Predator drone aircraft for military surveillance, one of several defence and nuclear projects the two sides are pursuing in the final months of the Obama administration. India's request for 22 Predator Guardian drones made in June is in an advanced stage of negotiations. The two sides hope to make enough progress so only administrative tasks remain by the time President Barack Obama leaves office, government officials in New Delhi said. "It is progressing well. The aim is to complete the main process in the next few months," said one of the officials, speaking on condition of anonymity. Indian Prime Minister Narendra Modi has built personal ties with President Barack Obama, whose signature foreign policy move has been a strategic pivot to Asia from the Middle East. The United States has dislodged Russia as the top arms supplier to India. New Delhi is also on the cusp of sealing a US nuclear reactor deal worth billions of dollars. In return, Washington has given New Delhi access to high-end military technology, such as a new system to launch planes off aircraft carriers, and leaned on other countries to give India membership in the Missile Technology Control Regime, which cleared the way for the sale of the unarmed Predator. India's military has also asked for the armed version of the Predator to help target suspected militant camps in Pakistan but US export control laws prohibit such a transfer. US Defence Secretary Ashton Carter, who visited India in April, is expected to make a final trip there towards the end of the year. "The administration is eager to get as much done as is humanly possible. They believe the conditions and the personnel in both capitals are uniquely favorable at the moment, and are eager to consolidate and institutionalize the progress," said Jeff Smith, director of Asia Security Programs at the American Foreign Policy Council. "America first" Republican presidential candidate Donald Trump's "America First" foreign policy statements have raised questions in India and other Asian nations about a US pullback from Asia. Trump has said US allies, such as Japan and South Korea, should pay more towards their defence. He told the New York Times in an interview in March he could withdraw US troops from bases in Japan, and raised the idea of letting Japan and South Korea develop their own nuclear arsenals. "It is a serious concern, and may lead to Chinese pre-eminence in Asia far sooner than expected," said Dhruva Jaishankar, a specialist on India-US ties at Brookings India. But Trump adviser Walid Phares, an American scholar and expert on Islamist radicals and counter-terrorism, said India had no reason to worry. "With India, there is the ongoing partnership against terror and both countries have suffered from jihadi urban attacks. One can only project cooperation," Phares said. Modi's office set up a six-member research group in July to help identify ways to engage with Trump, an aide said. India's diaspora in the United States, led by the Overseas Friends of Modi's Bharatiya Janata Party, has also opened a line to both presidential campaigns. The comfort level is much higher with the Democratic candidate, former Secretary of State Hillary Clinton, said a member of the Overseas Friends of BJP who is based in New Delhi. Manoj Ladwa, a London-based political strategist who served as communications director for Modi's 2014 campaign, said Trump had sent contradictory messages to India. "On the one hand, he says he values business relations with India, but then mimics Indian call centre workers, and disregards the competitiveness that a partnership with India could provide the US," he said. "His unpredictability is worrisome in a world that requires steady and mature statesmanship." Strategic programmes The centrepiece of the military collaboration is the help the United States is giving India in developing its biggest aircraft carrier. Washington has offered flight launch technology that is being inducted into its own carriers to fly heavier fighter planes off the deck, which could allow the Indian navy to leapfrog a generation of technology. In June, the United States reached agreement on exchanging confidential information on development of carriers with India - its only non-treaty ally with such an arrangement. "They have already started helping us on our first indigenous carrier, in terms of certification, quality testing," said the Indian government official. "The challenge will be to sustain the momentum over the next decade." In August the Modi government signed a logistics agreement giving each country access to the other's military bases, after 10 years of negotiations. Also on the table are two other defence agreements, one on securing communications and the other on sharing spatial data that Washington has been pushing for. Modi has shown he won't hesitate to "reach down and choke someone," to get things done, Smith at the American Foreign Policy Council said, quoting a Pentagon official.
#India #Obama administration #US #Indian Prime Minister Narendra Modi #President Barack Obama #Predator drone aircraft #military surveillance #defence and nuclear projects #Predator Guardian drkones #India US defence deals
You May Also like: