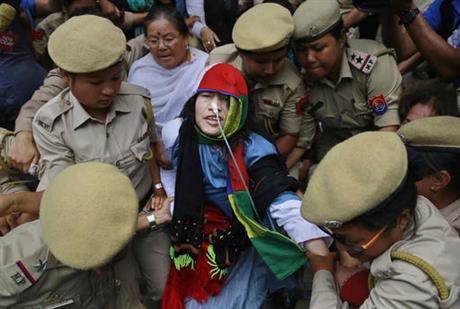 Activist Irom Sharmila is taken back to a hospital after a court appearance in Imphal, in the north-eastern state of Manipur, India, Tuesday, Aug. 9, 2016. AP

IMPHAL: An Indian court granted bail Tuesday to a hunger-striking political activist who has been force-fed for nearly 16 years, after she assured the judge that she planned to end her fast.

Irom Sharmila was escorted by police from the court after the judge's ruling and taken back to the hospital where she has long been detained. Babloo Loitongbam, a rights activist close to her, said he expected her to be freed later Tuesday, once the court paperwork had been processed.

Sharmila, 44, has not eaten voluntarily since Nov. 5, 2000, when she began fasting to protest an Indian law that suspends human rights protections in conflict areas, including her northeastern state of Manipur, which has long been plagued by uprisings by ethnic separatist militants and violent government crackdowns.

She had been charged with attempting suicide, a crime in India, allowing officials to force feed her through a tube that runs into her nose.

Sharmila announced last week that she planned to end the fast and run for state elections in hopes of overturning the draconian Armed Forces Special Powers Act.

The hunger strike, which she began days after 10 civilians were killed by paramilitary soldiers in Manipur, brought her supporters from around the world.

On Tuesday, an official with Amnesty International India said the fast was "a testament to her passion for human rights."

"The government arrested her, confined her to a hospital room and force fed her for 16 years, seemingly to break her will. There was zero dialogue. A peaceful protest was criminalized," said the official, Abhirr VP.

The Armed Forces Special Powers Act is in effect in Indian-ruled Kashmir and northeastern areas facing separatist insurgencies. The law gives security forces the right to shoot to kill suspected rebels without fear of possible prosecution and to arrest suspected militants without warrants. It also gives police wide-ranging powers of search and seizure.

It prohibits soldiers from being prosecuted for alleged rights violations unless granted express permission from the federal government. Such prosecutions are rare.

#hunger strike #Indian court #Irom Sharmila
You May Also like: