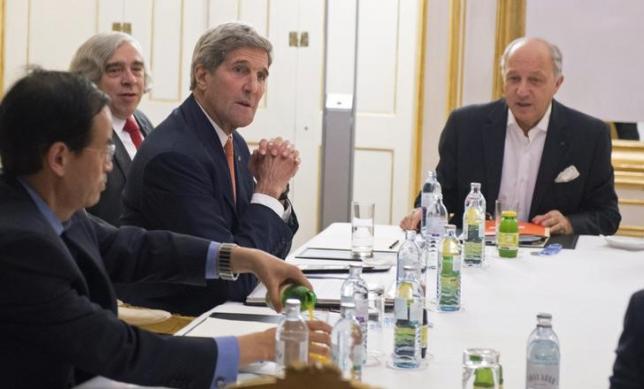 US Secretary of State John Kerry (3rd R), US  Secretary of Energy Ernest Moniz (2nd R) and French Foreign Minister Laurent Fabius (R) meet at the Palais Coburg, the venue for nuclear talks in Vienna, Austria July 14, 2015. REUTERS
VIENNA: Iran and six major world powers reached a nuclear deal on Tuesday, capping more than a decade of on-off negotiations with an agreement that could potentially transform the Middle East, and which Israel called an "historic surrender". Under the deal, sanctions imposed by the United States, European Union and United Nations would be lifted in return for Iran agreeing long-term curbs on a nuclear programme that the West has suspected was aimed at creating a nuclear bomb. Reaching a deal is a major policy victory for both US President Barack Obama and Iran's President Hassan Rouhani, a pragmatist elected two years ago on a vow to reduce the diplomatic isolation of a country of 77 million people. But both men face scepticism from powerful hardliners at home after decades of enmity between nations that referred to each other as "the Great Satan" and a member of the "axis of evil". "All the hard work has paid off and we sealed a deal. God bless our people," one Iranian diplomat told Reuters on condition of anonymity ahead of the official announcement. Israeli Prime Minister Benjamin Netanyahu called the deal "a bad mistake of historic proportions." "Iran will get a jackpot, a cash bonanza of hundreds of billions of dollars, which will enable it to continue to pursue its aggression and terror in the region and in the world," he said. "Iran is going to receive a sure path to nuclear weapons." Israeli Deputy Foreign Minister Tzipi Hotovely called the deal an "historic surrender". She said on Twitter that Israel would "act with all means to try and stop the agreement being ratified," a clear threat to try and use its influence to block it in the Republican-controlled US Congress. Congress has 60 days to review the deal, and if it votes to disapprove of it, Obama can veto the rejection. It would require two thirds of lawmakers to override such a veto, which means some of Obama's fellow Democrats would have to rebel against one of the signature achievements of their president in order to kill the deal. Final talks in Vienna involved nearly three weeks of intense round-the-clock negotiations between U.S. Secretary of State John Kerry and Iran's Foreign Minister Mohammad Javad Zarif, entirely unprecedented between the two countries. "SNAPBACK MECHANISM" FOR SANCTIONS Western diplomats said under the final agreement, Iran had accepted a "snapback" mechanism, under which some sanctions could be reinstated in 65 days if it violated the deal. A UN weapons embargo would remain in place for five years and a ban on buying missile technology would remain for eight years. The foreign ministers of Iran and the six powers will meet at 0830 GMT at the United Nations centre in Vienna and a news conference will follow, a spokeswoman for the European Union said on Tuesday. Zarif and the EU's foreign policy chief, Federica Mogherini, are expected to read a joint statement, diplomats said. US allies in the region are worried about an agreement that would benefit Iran. Tehran does not recognise Israel and supports its enemies. Arab states ruled by Sunni Muslims, particularly Saudi Arabia believe Iran supports their foes in wars in Syria, Yemen and elsewhere. But there is also strong reason for the United States to improve its relations with Iran, as the two countries face a common foe in Islamic State, the Sunni Muslim militant group that has seized swathes of Syria and Iraq. For Iran, the end of sanctions could bring a rapid economic boom by lifting restrictions that have drastically cut its oil exports and hurt its imports. The prospect of a deal has already helped push down global oil prices because of the possibility that Iranian supply could return to the market. Oil prices tumbled more than a dollar on Tuesday after the deal was reached. "Even with a historic deal, oil from Iran will take time to return, and will not be before next year, most likely the second half of 2016," Amrita Sen, chief oil analyst at London-based consultancy Energy Aspects, told Reuters. "But given how oversupplied the market is with Saudi output at record highs, the mere prospect of new oil will be bearish for sentiment."
#European Union #Iran #United Nations #nuclear deal
You May Also like: