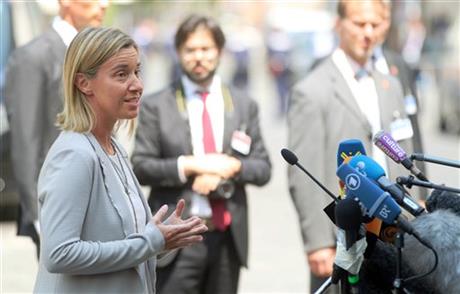 European Union High Representative Federica Mogherini talks to media in front of Palais Coburg where closed-door nuclear talks with Iran take place in Vienna, Austria, Tuesday, July 7, 2015. Mogherini said that negotiations will continue for the next couple of days despite hitting some “tense” moments. AP
VIENNA: Negotiations over Iran's nuclear program are lurching toward another deadline with diplomats reconvening amid uncertainty and vague pronouncements from participants. As the talks entered a 13th day in Vienna Thursday, Iran's President Hassan Rouhani said his nation is preparing for a "post-sanctions" era, suggesting that a deal may be in sight to curb the Iranian nuclear program in exchange for the removal of economic sanctions. At roughly the same time, the White House issued a brief statement saying President Barack Obama had conferred with the US negotiating team and provided them with "guidance" on how to proceed. The talks have been extended until Friday but the Obama administration must submit an agreement to Congress in the first few hours of Friday if it wants to avoid an extended legislative review.
#Iran #nuclear talks
You May Also like: