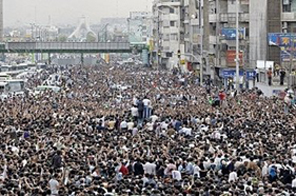 State television quoted Abbas Ali Kadkhodaei as saying that the recount would be limited to voting sites where candidates claim irregularities took place. It was not clear which or how many voting sites would be affected.

It serves as a constitutional watchdog and vets candidates running in elections. It must certify ballot results and also has the apparent authority to nullify an election.

Iran state radio reported Tuesday that clashes in the Iranian capital the previous day left seven people dead during an "unauthorized gathering" at a mass rally over alleged election fraud — the first official confirmation of deaths linked to the wave of protests and street battles after disputed elections in last week.

The report said the deaths occurred after protesters "tried to attack a military location." It gave no further details, but it was a clear reference to crowds who came under gunfire Monday after trying to storm a compound for volunteer militia linked to Iran's powerful Revolutionary Guard.

The shootings came at the end of huge rally by opponents of Ahmadinejad claiming widespread fraud in Friday's voting. The protest movement has shown no signs of easing — with another reported rally planned for later Tuesday — and has even forced Iran's non-elected ruling clerics into the unfamiliar role of middlemen between the government and its opponents.

#Iran: Ready for limited recount
You May Also like: