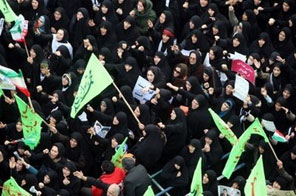 Female government supporters take to the streets of Tehran December 30 in a show of force against the opposition. Iranian opposition leader Mir Hossein Mousavi has said he is ready to sacrifice his life in his campaign to have the disputed June re-election of President Mahmoud Ahmadinejad overturned. Source: AFP

TEHRAN: Iranian opposition leader Mir Hossein Mousavi said on Friday that he was ready to sacrifice his life in his campaign to have the disputed June re-election of President Mahmoud Ahmadinejad overturned.

"I am not unwilling to become a martyr like those who made that sacrifice after the election for their rightful national and religious demands," Mousavi said in his first statement on his Kaleme.org website since deadly clashes on Sunday.

"My blood is no redder than theirs," he added.

Mousavi's nephew, Ali, was among at least eight people who died during Sunday's opposition protests during Shiite Muslim rituals for Ashura.

He called on Ahmadinejad's government to halt its crackdown against his supporters, which saw hundreds of people arrested during the demonstrations.

He urged the government "to take responsibility for the problems it has created in the country... release political prisoners... and recognise people's right to lawful assembly."

"I say openly that until there is an acknowledgement of the existence of a serious crisis in the country, there will be no possibility of resolving the problems and issues," he said.

The former prime minister rejected demands from hardliners for him to renounce his accusations of fraud in the June election in which he was Ahmadinejad's main challenger.

"I clearly and explicitly say that the order to execute, kill or jail (former parliament speaker and pro-reform presidential candidate Mehdi) Karroubi, Mousavi and people like us will not solve anything.

"Supposedly you calmed things down through your arrests, violence, threats and closure of newspapers and other media. What appreciation does that show for the change in public opinion about the Islamic republic?"

Mousavi rejected charges by Ahmadinejad and other officials that he and his supporters were "lackeys" of Iran's Western foes.

"We are neither Americans nor Britons. We have sent no congratulations cards to the leaders of major powers," he said, in mocking allusion to a card the Iranian president sent to Barack Obama on his election as US president in 2008.

"I consider it necessary to stress that we and the Green Movement have an Islamic and national identity and are against the domination of foreigners," he said of his election campaign colour that has become the opposition's signature.

"We are loyal to the constitution," he added, dismissing accusations by hardliners that the opposition's protests against Ahmadinejad's re-election have turned into a campaign to topple the Islamic regime.

"We want an honest and compassionate government that considers diversity of opinion and the popular vote to be opportunities, not threats.

"We consider invasion of people's privacy, interrogations, ransackings, newspaper closures and restrictions on what is published to be violations of the constitution."

Mousavi demanded in particular that the authorities end their interference with Internet services in Iran, which have been the main conduit for the opposition to spread news of its protests and arrests of its leaders.

"We are ready to show in debates that today the rights and interests of the oppressed, of workers, government employees and other classes of people are being swamped by massive corruption," he added.

Mousavi's statement made no reference to his current whereabouts. State media reported on Thursday that he had fled the capital Tehran for the northern province of Mazandaran on the Caspian Sea coast.

Opposition website Rahesabz reported new protests in central Tehran on Thursday and sporadic clashes with security forces a day after the regime brought hundreds of thousands of its own supporters onto the streets of major cities in a massive show of strength.

#Iran's Mousavi ready to sacrifice
You May Also like: