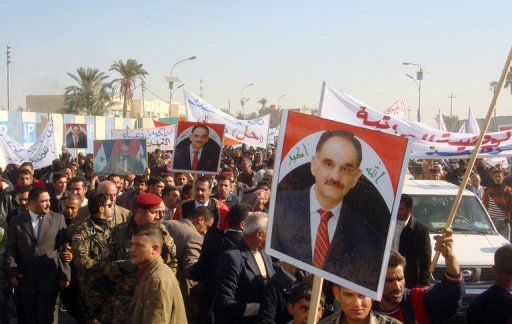 Saleh al-Mutlak is one of the most prominent politicians banned Source: AFP

BAGHDAD: Fourteen Iraqi politicians and parties linked to Saddam Hussein's Baath party have been barred from taking part in March elections, in a blow for efforts towards national reconciliation.

The decision to ban them from the polls, the second since Saddam's ouster after a US-led invasion in 2003, was made by Iraq's Independent Commission for Justice and Accountability in a bid to purge parties alleged to have been sponsored by diehard elements of the banned Baath party.

Among the most prominent politicians banned was Saleh al-Mutlak, a secular Sunni lawmaker who heads the National Dialogue Front.

"It is clear that this decision is against the law and the constitution," Mutlak told a press conference at his party's headquarters in central Baghdad.

"We will go to the Iraqi courts and we will try to deal with this issue through the appeals court. If the courts are not exposed to political pressure, we are sure that we will win."

He added: "We are fighters, and we will continue to fight (if the appeal fails)."

Any appeal would be heard by a federal court, and it was not immediately clear how long it would take for a ruling to be made.

Mahmud Othman, an independent Kurdish MP, said the decision would harm efforts towards national reconciliation, seen as key to reducing instability in a country that was engulfed in sectarian bloodshed in 2006 and 2007.

"This will not help reconciliation," Othman told AFP.

Baath party membership was a key condition for advancement in public sector employment during Saddam's regime.

Earlier, Falah Shanshal, an MP loyal to radical Shiite cleric Moqtada al-Sadr and head of the parliamentary committee charged with de-Baathification, said: "The decision has been taken by the commission after the emergence of evidence showing that Mutlak promoted and glorified the forbidden Baath party."

"Mutlak said in parliament, 'I will vote in the name of the Baath.' These words themselves are propaganda for the Baath Party of Saddam Hussein, and the constitution prevents voting for the Baath."

Shanshal confirmed that 13 other individuals or parties had been barred, but did not give details.

According to Othman, among those barred from running were Saad Assim Janabi, a Sunni businessman who owns Al-Rasheed television station, and Nehru Abdul Karim, a Kurd whose brother owns Al-Mashrik newspaper and television channel.

Haidar al-Mullah, a spokesman for the National Dialogue Front, accused Iran of being behind the decision to bar Mutlak from contesting the polls, just a day after Iranian Foreign Minister Manouchehr Mottaki completed a one-day visit to Baghdad.

"There are regional influences, particularly from Iran, taking such decisions, which aim to destabilise the Iraqi political process," he said.

Meanwhile, Hamdia al-Husseini, a senior election official, told AFP Iraq's Independent High Electoral Commission had not received any request to block any names from participating in the election.

On October 28, the National Dialogue Front confirmed that it was joining forces with Iraq's Sunni Vice President Tareq al-Hashemi and the bloc headed by ex-prime minister Iyad Allawi, a secular Shiite, to contest the March 7 election.