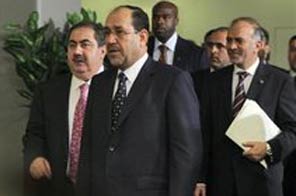 BAGHDAD:The Iraqi parliament will on Saturday attempt to finally pass an electoral law jeopardised by Vice President Tarek al-Hashemi's demand that it be changed before a general election can go ahead.

Iraq's presidential council, composed of President Jalal Talabani, a Kurd, and two vice presidents, including Sunni Arab Hashemi and one Shiite, has demanded a greater say in the election for minorities and Iraqi expatriates.

However, the war-torn country's Federal Supreme Court on Thursday threw out an attempted veto from Hashemi, ruling that election organisers, and not the law, governed how many seats be allocated to Iraqi nationals living abroad.

The vote, the second national poll since the US-led invasion of 2003 which ousted Saddam Hussein, is scheduled for mid-January but cannot go ahead until the law governing it receives presidential assent.

"The date of the vote on the presidential veto of the electoral law is Saturday," parliament speaker Iyad al-Samarrai told reporters in Baghdad, demanding MPs turn up to ensure the vote "reflects the will of the people".

Hashemi's insistence on securing the relevant change in the law led him to veto the legislation on Wednesday, leaving the planned election in doubt.

Talabani, meanwhile, on a state visit to France appeared to distance himself from Hashemi's demand and said the Sunni Arab vice president had been "under pressure" from his allies to use the veto.

"I am afraid that there will be a new delay to the election," Talabani told France 24 television. "That is why I decided not to oppose the electoral law.

"If the election is postponed after the date stipulated in the constitution, there will be a power vacuum."

He said that although he believed there were "deficiencies" in the law, he had backed it as Kurdish MPs "voted unanimously" for it to be approved.

"Mr Hashemi, under the pressure of his group, asked parliament to change the law," Talabani added.

#Iraq MPs to reconsider vote law
You May Also like: