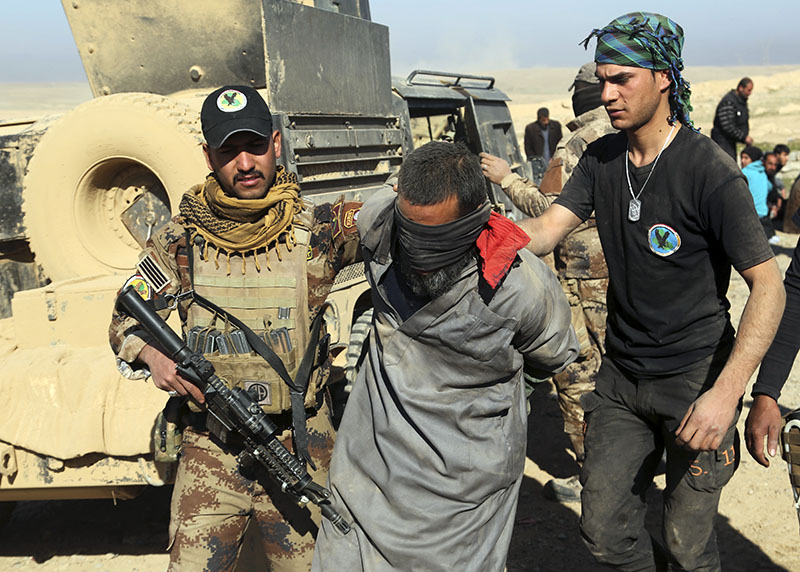 Iraqi special forces arrest a fighter with Islamic State militia in Mosul, Iraq, on Saturday, February 25, 2017. Photo: AP
SOUTH OF MOSUL: Iraqi forces pushed deeper into western Mosul Saturday amid stiff resistance from entrenched Islamic State fighters, a commander on the scene said.
Special forces Lieutenant General Abdul-Wahab al-Saadi said that his troops are "moving very slowly" and that IS fighters are responding with car bombs, snipers and dozens of armed drones. Hundreds of civilian have fled the conflict zone, he said. The drones have caused relatively few deaths, but have inflicted dozens of light injuries that have disrupted the pace of ground operations. Al-Saadi said he expects the pace to increase after Iraqi forces retake territory and infrastructure on Mosul's southwestern edge — which will allow them to shorten supply lines and link up with forces in the city's east. On the edge of a small village south of Mosul, dozens of families gathered against a crude cinderblock wall. Many said they were from villages outside Mosul and had been forced to march to the city more than four months ago to serve as human shields. "We've been through terrible times," said Juri Fathi, a mother of six who was forced to live in a school in Mosul for three months. "I had to burn my children's clothing just for warmth." Groups of men were screened at the site against a database of IS suspects and two prisoners were dragged past the crowd and into an abandoned building. "We brought them directly from inside Mosul," said an Iraqi special forces solider from inside the Humvee that delivered the detainees. He spoke on condition of anonymity in line with regulations. "They were shooting at us, I saw them with my own eyes," he said. Iraqi forces declared eastern Mosul "fully liberated" in January after officially launching the operation to retake the city in October. Also Saturday, the Saudi Foreign Minister Prime Minister was in Baghdad Saturday — the first high level visit of a Saudi official to the country since the 2003 US-led invasion — to meet with his Iraqi counterpart, Ibrahim al-Jaafari, and Prime Minister Haider al-Abadi. In a statement issued by the foreign ministry, al-Jaafari said the visit was to discuss cooperation in combating terrorism, adding, "The ties that bind are many, and the visit comes to restore bilateral relations to their correct course." The statement also called on Saudi Arabia to reiterate its position against Turkish ground troops in Iraq.