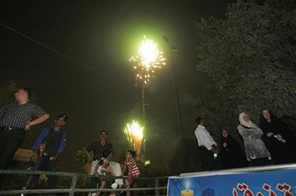 Fireworks light up the night sky above Baghdad, Iraq, Monday, June 29, 2009. U.S. troops will be out of Iraqi cities by tomorrow Tuesday June 30 in the first step toward winding down the American war effort by the end of 2011. (AP Photo/ Khalid Mohammed) Source: AP

BAGHDAD: Iraqi forces assumed formal control of Baghdad and other cities Tuesday after American troops handed over security in urban areas in a defining step toward ending the U.S. combat role in the country. A countdown clock broadcast on Iraqi TV ticked to zero as the midnight deadline passed for U.S. combat troops to finish their pullback to bases outside cities.
"The withdrawal of American troops is completed now from all cities after everything they sacrificed for the sake of security," said Sadiq al-Rikabi, a senior adviser to Prime Minister Nouri al-Maliki. "We are now celebrating the restoration of sovereignty."
The Pentagon did not offer any comment to mark the passing of the deadline.
Fireworks, not bombings, colored the Baghdad skyline late Monday, and thousands attended a party in a park where singers performed patriotic songs. Loudspeakers at police stations and military checkpoints played recordings of similar tunes throughout the day, as Iraqi military vehicles decorated with flowers and national flags patrolled the capital.
"All of us are happy Shiites, Sunnis and Kurds on this day," Waleed al-Bahadili said as he celebrated at the park. "The Americans harmed and insulted us too much."
Al-Maliki declared a public holiday and proclaimed June 30 as "National Sovereignty Day."
Midnight's handover to Iraqi forces filled many citizens with pride but also trepidation that government forces are not ready and that violence will rise. Shiites fear more bombings by Sunni militants; Sunnis fear that the Shiite-dominated Iraqi security forces will give them little protection.
If the Iraqis can hold down violence in the coming months, it will show the country is finally on the road to stability. If they fail, it will pose a challenge to President Barack Obama's pledge to end an unpopular war that has claimed the lives of more than 4,300 U.S. troops and tens of thousands of Iraqis.
The gathering at the Baghdad park was unprecedented in size for such a postwar event in a city where people tend to avoid large gatherings for fear of suicide bombers. They ignored an appeal by Vice President Tariq al-Hashemi to stay away from crowded places during the U.S. pullback, which has seen more than 250 people killed in bombings over the past 10 days.
Security at the party was stifling, as it was throughout much of Baghdad where increased checkpoints dotted the streets and identity checks were methodical. Police using bomb sniffers searched every man, woman and child who attended the party.
In a ceremony rich with symbolism, the top U.S. military commander in Baghdad, Maj. Gen. Daniel Bolger, gave his Iraqi counterpart the keys to the former defense ministry building, which had served as a joint base.
"On the eve of the 30th of June 2009 in accord with a security agreement between Iraq and America, Iraqis take the lead in Baghdad," Bolger said.
The withdrawal, required under a U.S.-Iraqi security pact, marks the first major step toward withdrawing all American forces from the country by Dec. 31, 2011. Obama has said all combat troops will be gone by the end of August 2010.
Despite Tuesday's formal pullback, some U.S. troops will remain in the cities to train and advise Iraqi forces. U.S. troops will return to the cities only if asked. The U.S. military will continue combat operations in rural areas and near the border, but only with the Iraqi government's permission.
The U.S. has not said how many troops will be in the cities in advisory roles, but the vast majority of the more than 130,000 U.S. forces remaining in the country will be in large bases scattered outside cities.
There have been some worries that the 650,000-member Iraqi military is not ready to maintain stability and deal with a stubborn insurgency.
Privately, many U.S. officers worry the Iraqis will be overwhelmed if violence surges, having relied for years on the Americans for nearly everything.
"We think they are ready," U.S. Ambassador Christopher Hill told The Associated Press in an interview Monday. He said his main concern was that a lack of progress in efforts to reconcile Shiite, Sunnis and Kurds was feeding the violence that still marks the daily lives of many Iraqis.
"Frankly they need to pick up the pace," Hill said of the national reconciliation effort.
The commander of U.S. troops in the Middle East, Gen. David Petraeus, expressed concern about the spate of high-profile bombings but said the average daily number of attacks remained low at 10 to 15 compared with 160 in June 2007.
"While certainly there will be challenges there are many difficult political issues, social issues, governmental development issues we feel confident in the Iraqi security forces continuing the process of taking over the security tasks in their own country," said Petraeus after meeting with Egyptian President Hosni Mubarak in Cairo.
Despite some concerns, al-Maliki appears eager to see the Americans leave and has urged Iraqis to hold steady against any rise in violence. Ahead of national elections next year, al-Maliki is portraying himself as the leader who defeated terrorism and ended the U.S. occupation.
Iraqi officials said they are expecting some violence but would not allow it to trigger the sectarianism that nearly sparked a civil war in 2006-2007.
At that time, death squads roamed the streets, slaughtering members of the rival Muslim sect. Bombs rocked Baghdad daily until thousands of U.S. troops poured in, establishing neighborhood bases and taking control of the Iraqi capital and other cities.
While the U.S. troop surge strategy was successful in stemming the bloodshed, many Iraqis also saw it as an affront to their national pride.
On a visit to Ramadi, a Sunni city 70 miles west of the capital, Interior Minister Jawad al-Bolani, a Shiite, told the AP that when the sun rises on Tuesday "Iraqi citizens will see no U.S. soldiers in their cities. They will see only Iraqi troops protecting them."