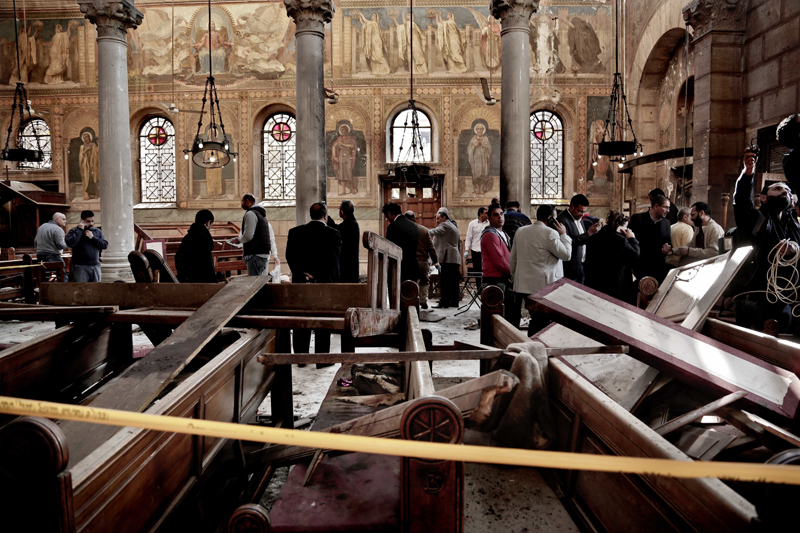 FILE -- In this Dec. 11, 2016 file photo, security forces examine the scene inside the St. Mark Cathedral in central Cairo, following a bombing that killed dozens of people. Photo: AP
CAIRO: An Islamic State group affiliate in Egypt released a video Monday showing the suicide bomber who killed nearly 30 people when he attacked a packed church in December and vowing more attacks on the country's Christian. A narrator says in the 20-minute video that the Egyptian Christians are the extremist group's "favorite prey." The video shows footage of Egypt's Coptic Christian Pope, Christian businessmen, judges and priests who either speak of the need to protect the minority or use derogatory terms to refer to Egypt's Muslim majority. The narrator says Christians were no longer "dhimmis," a reference to non-Muslims in Islam who enjoy a degree of state protection. Instead, the group describes the Christians as "infidels" who are empowering the West against Muslim nations. "God gave orders to kill every infidel," one of the militants carrying an AK-47 assault rifle says in the video. Egypt's Coptic Christians, who make up around 10 percent of the population, have been always a favorite target of Islamic extremists. Attacks on churches by Muslim mobs increased since the 2013 military overthrow of an Islamist president. Christians overwhelmingly supported the army chief-turned-president, Abdel-Fattah el-Sissi, and extremists have used such support as a pretext to increase attacks against them. The video shows footage of Abu Abdullah al-Masri, the militant who blew himself up at the central Cairo church in December. The attack, says the narrator, was "only the beginning." "Oh worshippers of the cross ... the soldiers of the state are watching you," another masked militant identified as Abu Zubair al-Masri says. The video carries the logo "Egypt" instead of the normal "Wilayat Sinai" or the state of Sinai. Wilayat Sinai, the name of the IS branch in Sinai, has claimed responsibility for dozens of suicide bombings and attacks, mainly targeting security forces and military across the country but primarily in Sinai Peninsula, where the army has been leading an anti-terrorism operation for years. The IS message comes at a time when attacks on Coptic Christians have escalated in Sinai. In the past month, at least three Christians were gunned down in separate drive-by shooting attacks in the city of el-Arish. El-Sissi has repeatedly assured Egypt's Christians of his goodwill toward the community, visiting the seat of the Coptic Orthodox church in Cairo on major holidays, but many in the ancient community complain that very little has changed in their lives since el-Sissi took office in 2014, especially in rural areas where Muslim radicals frequently attack Christian homes and businesses over a range of issues, including the construction or restoration of churches, land disputes or sexual affairs between members of each community.
#Egypt #Islamic State #Christians #Christian religion #Egyptian Christians
You May Also like: