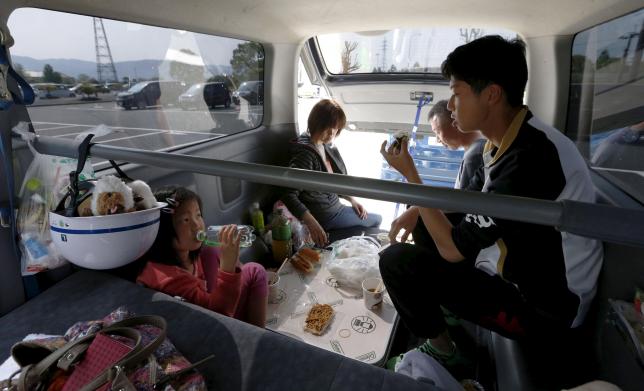 A family of evacuee who have been using their vehicle for shelter rest after a series of earthquakes in Mashiki town, Kumamoto prefecture, southern Japan, in this photo taken by Kyodo April 19, 2016. Mandatory credit Kyodo/via
TOKYO: Survivors of a series of Japanese quakes measuring up to 7.3 struggled on Tuesday with shortages of food and water as the death toll rose to 44 and rescuers dug through mud and rubble for the missing, but hopes dimmed of finding them alive. Japanese stocks bounced back from Monday's slide, with electronics manufacturer Sony Corp climbing 6.7 percent after saying its image sensor plant in Kumamoto, shut after the quake, makes components mainly for digital cameras. Flights resumed to the damaged airport in the southwestern area of Kumamoto, which suffered the worst of the damage, but aftershocks continued to rattle the region and survivors spent another night huddled in cars and evacuation centers, afraid to return to their damaged homes. "It's really tough," one woman told TV Asahi, her two-month-old baby sleeping in blankets on the floor, at her side. "There's no milk and only the diapers we brought with us. Once they run out, there's nothing." About 30,000 rescuers dug through mud and splintered houses, and Japanese media reported that one of those missing was pulled out without signs of life on Tuesday, four days after the worst quake struck in the early hours of Saturday. Eight remain missing and more than 1,000 were injured. More than 94,000 people remained in evacuation centers, cut off from the world by destroyed roads, but television footage showed relief goods being unloaded from planes at the main airport and water services gradually being restored. "These quakes have produced massive damage, and police, firemen and military personnel are making every effort to restore things," Chief Cabinet Secretary Yoshihide Suga told a news conference, warning of further aftershocks. A 5.8-magnitude quake hit the area late on Monday. Of more than 600 quakes hitting Kyushu since Thursday, more than 87 have registered at least a four on Japan's intensity scale, strong enough to shake buildings. The Kumamoto region is an important manufacturing hub and home to Japan's only operating nuclear station, which has been declared safe. The benchmark Nikkei rose 3.7 percent to 16,869.29 in mid-morning trade, with major exporters rebounding sharply after tumbling on Monday, hit by a stronger yen and worries that the earthquakes could disrupt their supply chains. A 9-magnitude quake and tsunami in northern Japan in March 2011 caused the worst nuclear crisis since Chernobyl in 1986, shutting down the nuclear industry for safety checks and sending radiation spewing across the countryside. Nearly 20,000 people were killed in the 2011 tsunami.
#earthquake #Japan #Tsunami
You May Also like: