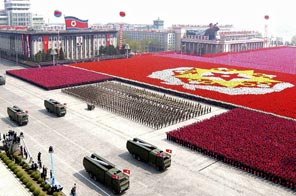 The summit comes as Pyongyang steps up its confrontational rhetoric amid global suspicions that the regime is preparing to fire more missiles and stage a military exercise off its east coast.

The two leaders are likely to discuss the implementation of UN sanctions against North Korea, which call for tougher inspections of cargo suspected of containing banned missile- and nuclear-related items.

Lee and Aso are expected to reiterate their calls on China to help put pressure on North Korea to heed the wishes of the international community and to drop its nuclear ambitions.

Lee is also expected to discuss his recent talks with US President Barack Obama, with whom he mulled five-way talks with China, Russia and Japan about pressuring Pyongyang.

China is North Korea's main ally and has always favoured cautious diplomacy towards Pyongyang, wary of any moves that could push the Stalinist regime to collapse and potentially send millions of refugees streaming over its border.

However, six-way talks including North Korea made little progress on its nuclear disarmament, with Pyongyang detonating nuclear explosions in 2006 and on May 25 this year.

Tokyo and Seoul have led the push in East Asia against the North's increasingly antagonistic stance, with Pyongyang repeatedly warning of a military confrontation.

North Korea has vowed to build more nuclear bombs and to start a new weapons programme based on uranium enrichment in response to the UN sanctions.

North Korea warned Thursday that "dark clouds of nuclear war" were gathering over the peninsula and vowed to strengthen its atomic arsenal as it marked the anniversary of the outbreak of the 1950-1953 Korean war.

Meanwhile, a US Navy destroyer was last week reported to be trailing a North Korean ship, potentially carrying arms and possibly headed for Myanmar. Myanmar has dismissed the reports as "rumours."

Lee's one-day trip to Tokyo is part of "shuttle summit diplomacy," a system that sees the leaders visit each other twice a year for talks on issues including diplomatic and economic matters.

They are also expected to hear from a group of Japanese and South Korean business leaders on ways to improve bilateral economic relations.

Other topics on the agenda are likely to be efforts towards the resumption of talks on a free trade agreement, global recession and helping Afghanistan and Pakistan in their battle against militants.

#Japan #SKorea focus on NKorea
You May Also like: