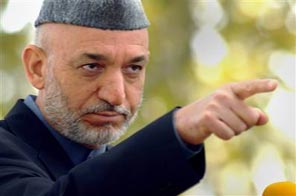 KABUL: President Hamid Karzai on Thursday defended Afghanistan's troubled elections and urged foreign allies not to meddle over inquiries into mass fraud allegations that could slash his clear lead.

Afghans went to the polls last month to elect a president for only the second time in their history with a Taliban insurgency at its deadliest since the 2001 US-led invasion replaced the Islamist regime with Western-backed rule.

The Independent Election Commission (IEC), which has been accused of bias towards Karzai, has released results in an agonisingly slow process alongside mounting claims of massive vote-rigging in favour of the president.

Addressing reporters publicly for the first time since the eve of the August 20 poll, Karzai played down allegations of fraud and said he would respect investigations by the IEC and UN-backed Electoral Complaints Commission.

"Media has reported major fraud. It wasn't that big. If there was fraud, it was small -- it happens all over the world," Karzai told a news conference at his heavily fortified palace in the Afghan capital.

His comments came as a massive suicide car bomb ripped into a NATO convoy killing six Italian soldiers and 10 Afghan civilians in one of the deadliest attacks on Western troops in Kabul, underscoring the increasing Taliban threat.

Karzai, whose nearly eight-year rule has been marred by worsening violence, corruption and cooling ties with the West, has been on a collision course with his international backers over the fraud-tainted election.

The disputed poll had "complicated the picture" for the administration of US President Barack Obama as it reviews the US war strategy, Defense Secretary Robert Gates said in Washington.

"It remains to be seen how long it will take to see the outcome of the election," Gates told a news conference.

On Wednesday, preliminary results put Karzai on track for re-election with 54.6 percent but recounts at more than 2,500 polling stations could yet tip the balance and force him into a run-off with his rival Abdullah Abdullah.

Observers from the European Union say they have identified 1.5 million votes that could be fraudulent nearly a quarter of the total valid votes and 1.1 million of them cast for Karzai.

"If there is fraud, it has to be investigated, but investigated fairly and without prejudice," Karzai said Thursday.

"I hope our foreign friends respect the people of Afghanistan and let the IEC and the ECC fulfil their work without interference."

Karzai's campaign office reacted furiously to the EU observers, accusing them of meddling and damning the announcement as "partial, irresponsible and in contradiction with Afghanistan's constitution."

Abdullah, who trails with 27.8 percent of the preliminary count, welcomed statements from the ECC, European Union, United Nations and United States backing investigations into fraud allegations, which could take weeks.

"The IEC was involved in frauds during the elections. That is the reason why the final results have not been announced," he said, calling for a run-off and saying that a first-round Karzai victory would help the Taliban.

Afghanistan is gripped by the deadliest violence and an expanding Taliban insurgency that has made parts of the north and west increasingly volatile, on top of the south and southeast where the Islamist militia are strong.

Threats of militant violence are believed to be behind the meagre election turnout of 38.7 percent, compared to the 70 percent turnout among voters who registered in the first presidential election in 2004.

The IEC says limited recounting is under way, but has given no timescale for the process. A leading think-tank called for an interim government as the only way to avoid a political crisis in the destitute and war-torn country.

The International Council on Security and Development (ICOS) warned that delays could create a dangerous political vacuum and recounts could take Karzai below the threshold needed to avoid a run-off.

"The protracted electoral fraud investigation means that it will not be possible to hold a run-off before November," the London-based group said.

But by then, the harsh winter could potentially delay any vote until May, "leaving Afghanistan in a constitutional vacuum for eight months," said ICOS.