Karzai gets 54% of Afghan vote 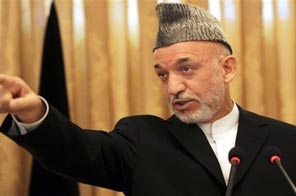 KABUL: Afghanistan's election commission says President Hamid Karzai has 54 percent of the vote with almost all the ballots in the Aug. 20 presidential poll now counted.

The results show that Karzai has surpassed the important 50 percent threshold for the first time. Karzai needs a majority of ballots cast to avoid a two-man run-off with his top challenger, Abdullah Abdullah. The commission says nearly 92 percent of votes have been counted.

Still, the U.N.-backed Electoral Complaints Commission ordered a re-count Tuesday of ballots where it had found "convincing evidence" of fraud," meaning Karzai could still have votes taken away from him.

Results won't be officially certified until late September, after fraud allegations have been investigated.

THIS IS A BREAKING NEWS UPDATE. Check back soon for further information. AP's earlier story is below.

KABUL (AP) — The U.N.-backed commission ordered a re-count Tuesday of ballots where it had found "convincing evidence" of fraud in Afghanistan's presidential election, including polling stations where all votes were cast for a single candidate.

Widespread allegations of ballot-box stuffing and suspicious tallies are threatening the legitimacy of Afghanistan's Aug. 20 vote as the country awaits final results. More than 720 major fraud charges have been lodged with the Electoral Complaints Commission.

A separate Afghan-run body which organized the election has already thrown out votes from 447 stations — about 200,000 ballots — because of fraud.

The complaint commission's announcement Tuesday ordering a re-count of votes at "questionable" polling stations comes with results from nearly three-quarters of stations already released. Incumbent President Hamid Karzai stands just shy of the 50 percent of the vote he needs to avoid a run-off election with his main challenger Abdullah Abdullah.

Western officials say ballots have been submitted from hundreds of fake voting sites, especially across the Afghan south, where Karzai's support is strongest. The election commission has tallied dozens of voting sites where Karzai won neatly rounded blocks of ballots — 200, 300 and 500 votes — results that one Western official labeled "illogical."

The commission's order to re-count some results adds to the uncertainty surrounding the vote. A credible election is seen as critical to the Western-backed efforts to stabilize Afghanistan and win public support for the fight against the Taliban insurgency.

The commission did not say how many polling stations would require re-counts, but it noted that it had so far identified some with questionable results in Ghazni, Paktika and Kandahar provinces, and that it is launching investigations in other provinces.

Stations showing 100 percent turnout or with a presidential candidate receiving more than 95 percent of the vote will need to be audited and recounted, the commission said in a statement. Stations with fewer than 100 ballots will be exempt from the process.

Grant Kippen, a Canadian who is chairman of the Electoral Complaints Commission, said the irregularities found include ballots not being folded — meaning they would not fit in a ballot box slot — identically marked ballots and overly large counts at polling stations.

Kippen said he saw a ballot box with 1,700 ballots in Kandahar, even though the maximum should be 600. He stressed that the commission is making its decisions without considering the impact on the election.

"We just take this on a complaint-by-complaint basis, and how that pans out, we really don't know and in many respects don't care, because it's not material to the work that we're doing," Kippen said.

The Afghan election commission, a separate body that runs the entire election process, has so far thrown out votes from 447 stations — about 200,000 ballots — because of fraud, officials said.

"The numbers were suspicious and the results did not match with the reconciliation form" used to double-check results, said Daoud Ali Najafi, the chief electoral officer of the Afghan body, the Independent Election Commission.

"In some areas the turnout was higher than the number of ballots we sent to the polling station," Najafi added. He said the ballots have been sent to the U.N.-backed complaint commission, which will decide if any can eventually be included in the official count.

The top U.N. representative in Afghanistan, Kai Eide, called on Afghan election officials to exclude ballots from the vote count that have "evidence of irregularities."

With results from 74 percent of polling stations released so far, Karzai has 48.6 percent with about 2.1 million votes. Top challenger Abdullah Abdullah has 31.7 percent, or 1.4 million votes. Karzai needs more than 50 percent to avoid a runoff.

Najafi said he did not have a regional breakdown of the discarded results, but said investigation teams have been sent to Ghazni, Paktika and Kandahar provinces.

A senior Western diplomat alleged Monday that a majority of the votes in three provinces — Kandahar, Paktika and Khost — are fraudulent. Partial returns from each of those provinces heavily favor Karzai. The diplomat spoke on condition of anonymity because of the sensitive nature of his work. Others have said there have been as many as 800 fake polling sites from which tallies came in.

Najafi said it was unlikely that 800 polling stations were faked, and said the most recent number of fraud-annulled stations he had was the 447 announced Sunday.

About 4.3 million votes have been tallied so far, but some 224,000 were thrown out because the candidate had withdrawn or because of problems with the ballot like a vote cast for not one but two presidential candidates. The discarding of the additional 200,000 votes for fraud means at least 424,000 votes are not being included in the final tally.

#Karzai gets 54% of Afghan vote
You May Also like: