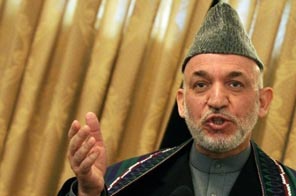 KABUL: Afghan President Hamid Karzai has fired the mayor of Kabul, who was sentenced to a jail term over corruption charges last month, and appointed an engineer to take over in the capital, his office said Monday.

Mir Abdul Ahad Sahebi was convicted in a primary court in early December and sentenced to four years in prison on charges linked to corruption. He was released on bail pending appeal and swiftly returned to work.

Karzai had previously defended Sahebi, calling him "a clean person" and ordering an investigation into the charges against him.

"The president has appointed a new mayor for Kabul. The new mayor is Mohammad Younus Nawhandish, he is a civil engineer," the spokesman said.

Herawi said, however, that the dismissal was not linked to the conviction.

"No, it has nothing to do with the court case, the president just wanted to have a new and capable person in the job," he said.

The sentencing of Sahebi was the first high-profile corruption conviction since Karzai came under renewed Western pressure to crack down on graft after winning a second term in presidential elections last year.

#Karzai sacks convicted Kabul mayor
You May Also like: