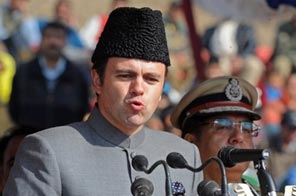 Jammu and Kashmir Chief Minister Omar Abdullah addresses a ceremony for fallen security personnel in Zewan on the outskirts of Srinagar in October, 2009. Source: AFP

SRINAGAR: Indian Kashmir's chief minister marked a year in office on Wednesday by pledging to slash security forces in the Muslim-majority region if militant violence falls further.
With the security threat diminishing, the "lesser will be the need for forces to deal with it", said Omar Abdullah, the 39-year-old leader of Kashmir's ruling National Conference party.

Once "peace prevails", then the need for "men in uniform reduces drastically", he said in an English-language statement.

Incidents of unrest in Kashmir, wracked by a separatist insurgency for two decades, were down by about 25 percent last year, police say. India last year responded by pulling out some 30,000 troops from the Himalayan region.

Kashmir is divided into Indian- and Pakistani-controlled zones and has been the trigger for two wars between the South Asian rivals since their independence from Britain in 1947.

Despite a boycott call by separatists and Islamic rebels, more than 60 percent of voters took part in the state polls late in 2008, which came after a period of direct federal rule.

Abdullah was backed by India's ruling Congress party for the top job, after polls in the troubled region produced no single party strong enough to form the government on its own.

The chief minister also said there had been an improvement in human rights during his tenure.

English-born Abdullah inherited the party leadership in 2002 from his father, Farooq Abdullah, but is seen as more moderate.

#Kashmir chief pledges troop cut
You May Also like: