Kerry issues warning as Syrian parties back halt to fighting 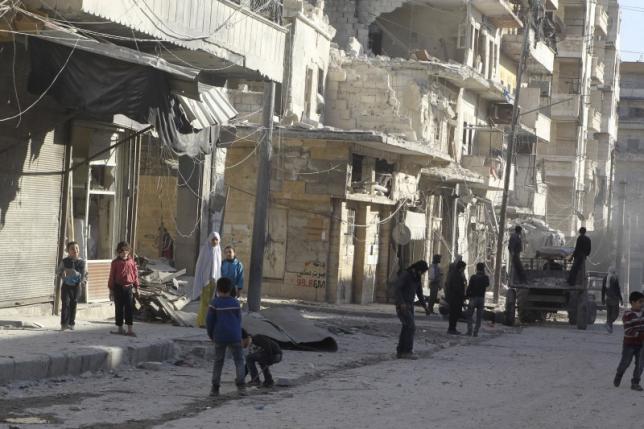 BEIRUT/WASHINGTON: The government of Syrian President Bashar al-Assad and rebel groups accepted a plan for a cessation of hostilities to begin on Saturday and the United States warned it would be hard to hold the country together if the fighting did not stop.

With hostilities reported on several fronts, rebels backed by Saudi Arabia expressed doubts about the proposal, which excludes attacks by the Syrian army and its Russian backers on the jihadist groups Islamic State and the al Qaeda-linked Nusra Front. Saudi-backed rebels said Russia had stepped up air strikes since the plan was announced on Monday.

For its part, the government in Damascus has made clear that continued foreign help for the rebels could wreck the deal.

Secretary of State John Kerry said the United States would soon know if the plan would take hold. "The proof will be in the actions that come in the next days," he told the Senate Foreign Relations Committee in Washington.

If a political transition to a government to replace the current administration does not unfold in Syria, there are options, Kerry said, in a reference to undefined contingency plans believed to include military action.

The next month or two would show if that transition process was serious and Assad would have to make "some real decisions about the formation of a transitional governance process that's real," Kerry said.

Faced with scepticism about the cessation plan, Kerry said that things in Syria could get uglier.

"It may be too late to keep it as a whole Syria if we wait much longer," he said.

Kerry insisted Washington is working on ways to react if diplomacy does not work. "There is a significant discussion taking place now about Plan B if we don't succeed at the table," Kerry said.

France said the leaders of the United States, France, Britain and Germany hoped the cessation deal could take effect soon.

The plan is the result of intense diplomacy to end the five-year-long war that has killed 250,000 and forced millions to flee their homes helping to cause a refugee crisis in Europe.

But rebels say the exclusion of Islamic State and Nusra Front will give the government a pretext to keep attacking them because its fighters are widely spread in opposition-held areas.

The Syrian government, backed by Russian air strikes since September, said it would coordinate with Russia to define which groups and areas would be included in what it called a "halt to combat operations".

The terminology reflects the difficulties of getting peace efforts under way, with talks in Geneva making no headway and the failure amid further fighting of a cessation of hostilities announced on Feb. 12.

The United Nations describes a cessation as something that would precede the more formal ceasefire it is hoping to establish at some future date.

UN spokesman Ahmad Fawzi said: "A ceasefire implies a whole mechanism and agreements, signed agreements between the parties etc. This is a cessation of hostilities that we hope will take force very quickly and provide a breathing space for the intra-Syrian talks to resume."

Assad objects to the word "ceasefire", saying it is something concluded between armies or states. "It does not happen between a state and terrorists," he said last week. Instead, he has offered a "halt to combat operations".

The Russian intervention in the fighting has turned the momentum Assad's way in a conflict that has mostly reduced his area of control to the big cities of the west and the coast.

US Republican Senator Bob Corker, chairman of the Senate Foreign Relations Committee, said he did not believe Russia was convinced it would suffer any consequences if the plan fails. He said he expected Assad's forces, backed by Russia, would continue to seize territory.

"I don't think Russia believes that anything is going to happen. And I think that's why they continue to make the gains," Corker said.

On Tuesday, Islamic State fighters were reported to have tightened their grip on a supply route to Aleppo that had been used by the Syrian government in its campaign to seize the city.

Heavy Russian air strikes in support of the army were also said to be targeting one of the last roads into opposition-held parts of Aleppo.

Damascus, backed by ground forces including Lebanon's Hezbollah and Iranian Revolutionary Guards, is making significant advances near Aleppo, which is split between rebel- and government-control.

The Syrian Observatory for Human Rights, which reports the war using a network of sources on the ground, said Islamic State fighters had seized the village of Khanaser on the road, which remained closed for a second day. A Syrian military source told Reuters that army operations continued to repel the attack.

In a statement on the proposed cessation of hostilities, the government in Damascus stressed the importance of sealing Syria's borders and halting foreign support for armed groups whose activities it said could wreck the agreement.

The Syrian military reserved the right to "respond to any breach by these groups against Syrian citizens or against its armed forces", the government statement added.

The main, Saudi-backed Syrian opposition body said late on Monday it consented to international efforts, but said acceptance of a truce was conditional on an end to blockades of rebel-held areas, free access for humanitarian aid, a release of detainees, and a halt to air strikes against civilians.

The opposition High Negotiations Committee also said it did not expect Assad, Russia or Iran to cease hostilities.

The powerful Kurdish YPG militia, which is fighting both Islamic State and rebels near Aleppo, is "seriously examining" the US-Russian plan to decide whether to take part, a YPG official told Reuters.

Turkey, a major sponsor of the insurgency against Assad, said it welcomed plans for the halt to fighting but was not optimistic about a positive outcome to talks on a political transition.

A rebel fighter in the Aleppo area said he did not expect the ceasefire plan to work and Russian warplanes "will not stop bombing".