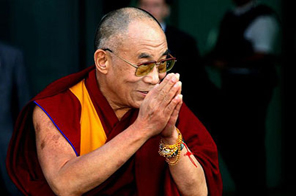 BEIJING: China expressed its indignation Tuesday at an honor given to the Dalai Lama by the city of Paris, saying it would seriously harm Beijing's relations with France.

Foreign Ministry spokesman Qin Gang told a regular news conference that the move was a "gross provocation against the Chinese people ... and greatly undermines China-France relations." France accuses the Dalai Lama of trying to separate Tibet from the rest of China, and objects to all meetings between the Dalai Lama and foreign leaders.

Qin said China expressed its "strong dissatisfaction" with the honor and urged Paris "correct its wrongdoing" and stop interfering in China's internal affairs. He did not say what sort of actions China may take in response.

China put relations with France in a deep freeze for months following a meeting between French President Nicolas Sarkozy and the Dalai Lama in December. It suspended high-level contacts and shut France out of lucrative European buying trips by Chinese delegations.

#Lama's honour to hurt ties: China
You May Also like: