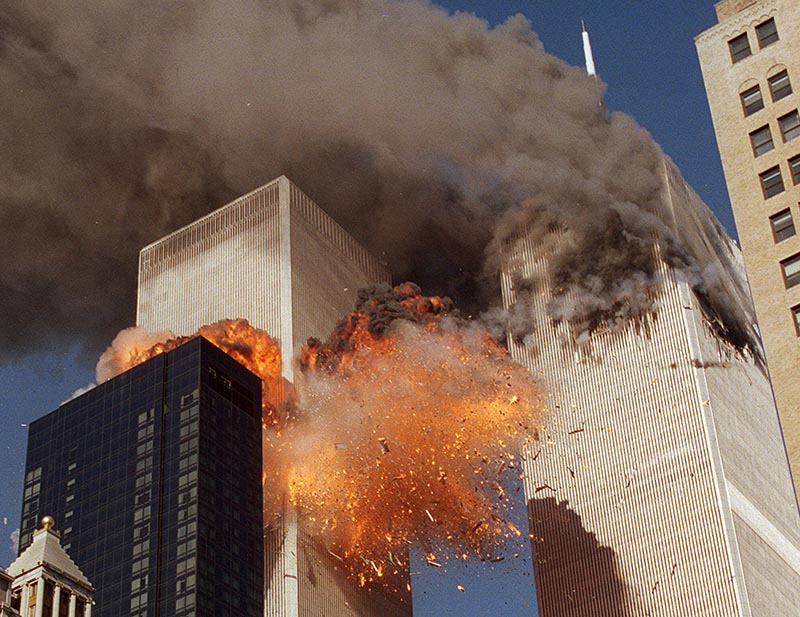 File - smoke billows from one of the towers of the World Trade Center and flames as debris explodes from the second tower in New York. Family members of 9/11 families and others harmed in the terrorist attacks are on a fresh quest to hold Saudi Arabia responsible, On September, 11, 2001. Photo:AP
NEW YORK : For years, family members of those killed on Sept. 11 and insurance companies tried unsuccessfully through the courts to hold Saudi Arabia or businesses and organizations there responsible for the terrorist attacks. Now that Congress has cleared the way, they're making a fresh effort. In the next year, the Manhattan federal courts will make rulings signaling to thousands of family members of those killed and injured first responders whether passage of the 2016 Justice Against Sponsors of Terrorism Act was largely a symbolic exercise or a catalyst to getting them to trial. Timothy Litzenburg, a Richmond, Virginia, lawyer, said his firm raced to court hours after Congress overrode former President Barack Obama's veto in late September, hoping to get an early start on winning damages for litigants. "We thought maybe we could do the first trial," he said. But now that the lawsuits have been consolidated before a New York federal court, Litzenburg predicts it could be a decade before there is a resolution for over a dozen lawsuits filed against the kingdom. US Magistrate Judge Sarah Netburn tried to put the litigation on a faster track Thursday, telling dozens of lawyers at a Manhattan conference that she believes some of the lawsuits can be combined because they make identical or similar claims. She noted the latest lawsuit had been filed just hours earlier. James Kreindler, a plaintiffs' lawyer in one new lawsuit, told her he expects the lawsuits may be combined into two legal actions, perhaps within a month. Michael Kellogg, a lawyer for Saudi Arabia, said at Thursday's hearing that lawyers for plaintiffs were unfairly using mostly the same plaintiffs in 9/11 cases brought 14 years ago to make new claims against Saudi Arabia. "They've added a number of different allegations, which will complicate the process," he said. Saudi Arabia, an important US ally in the Middle East, had lobbied against the new law. President Donald Trump had called Obama's veto "shameful." Obama said he rejected it because it could open up the US government to lawsuits around the world claiming that the United States has supported terrorism. Sovereign immunity usually protects governments from lawsuits, but the bill creates an exception that lets litigants hold foreign governments responsible if they support a terrorist attack that kills US citizens on American soil. Previous efforts to hold Saudi Arabia, its officials, and banks and charitable organizations responsible for the attacks have failed in the courts. Not all of the cases have been tossed out solely for sovereign immunity reasons. In 2008, the 2nd US Circuit Court of Appeals ruled that four Saudi princes cannot be held liable in the Sept. 11 attacks even if they were aware that charitable donations to Muslim groups would be funneled to al-Qaida. The court said the plaintiffs would need to prove the princes engaged in intentional actions aimed at US residents. A lower court judge had earlier cited the Sept. 11 commission, saying it found no evidence Saudi Arabia — the birthplace of Osama bin Laden and 15 of the 19 hijackers — funded or supported the Sept. 11 terrorists. Saudi lawyers have not responded to requests to comment on the new lawsuits. In the past, they've said in court papers that families are relying on the submission of "thousands of pages of inadmissible and irrelevant materials."
#Saudi Arabia #Osama bin Laden #international relations #US Circuit Court of Appeals #9/11 terrorist attack #President Donald Trump #2016 Justice Against Sponsors of Terrorism Act #Lawsuits blaming Saudi Arabia
You May Also like: