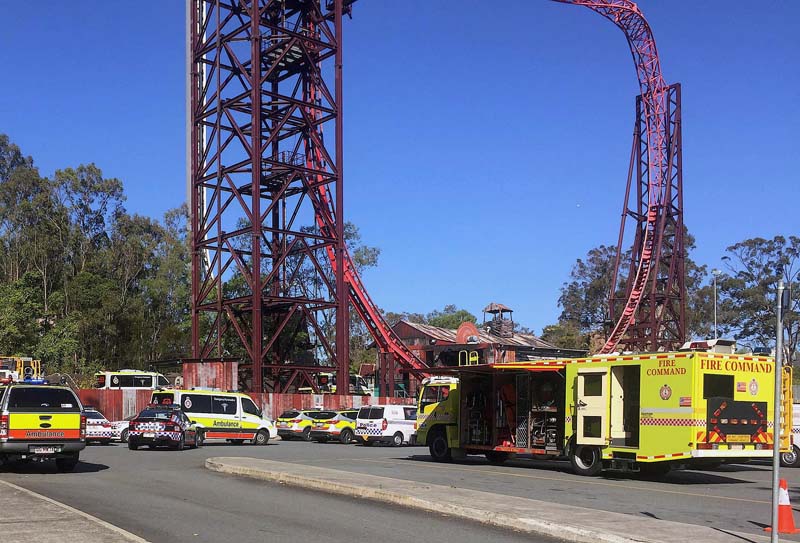 Emergency services vehicles can be seen outside the Dreamworld theme park at Coomera on the Gold Coast, Australia, on Tuesday, October 25, 2016. Photo: Reuters
(UPDATE) SYDNEY: Four people were killed on Tuesday on a river rapids ride at Australia's biggest theme park, police said, after a malfunction threw two of the victims off the ride and left the other two trapped inside.
Media broadcast images of crowds of rescue workers at the Thunder River Rapids Ride at Dreamworld on the Gold Coast, the main tourist district in Australia's northeastern state of Queensland. "One of the rides sustained a malfunction, causing two people to be ejected from a ride, and the other two were caught inside the ride," Gavin Fuller, an official of Queensland Ambulance, told reporters. The four dead ranged in age from their early 30s to their early 40s. It was not immediately clear if they were locals or tourists, police said. Shares in park owner and operator, Ardent Leisure Group , dropped 7 percent in the final hour of trade after the incident, having spent most of the day little changed. Dreamworld said in a statement it was "working as quickly as possible to establish the facts around the incident". It added, "Dreamworld's focus and priority is with the families of those involved in this tragedy and will be providing an update to the public as soon as information becomes available." Asked if there were any earlier problems with the ride, Todd Reid, an inspector with Queensland Police, said, "I'm not aware, but that will be part of the investigation. "We are now working together with the park to try to determine how this tragic incident occurred." Tuesday's tragedy ranks among the world's deadliest theme park accidents. Earlier incidents include eight teenagers killed in a 1984 fire at the Six Flags Great Adventure amusement park in New Jersey in the United States; six people killed by a failed simulated rocket launch in Shenzhen, China, in 2010 and five children killed when the Battersea Park Big Dipper malfunctioned in Britain in 1972.

SYDNEY: At least three people have been killed on a ride at Australia's biggest theme park, the organisation said on Tuesday.

The incident took place at Dreamworld, on the Gold Coast tourist district in Queensland state, police said on their official account on social network Twitter. "Dreamworld is working as quickly as possible to establish the facts around the incident," theme park officials said in a statement, adding that they were working closely with emergency authorities and police. "Dreamworld's focus and priority is with the families of those involved in this tragedy and will be providing an update to the public as soon as information becomes available." In an earlier tweet, Queensland police said four people were critically injured. Media said the accident happened on a ride known as the "Thunder Rapids River Ride". Police said they would provide more details at a news conference later on Tuesday.
#Australia #Queensland #Dreamworld #Gold Coast tourist district #Australia's theme park incident #Thunder Rapids River Ride
You May Also like: