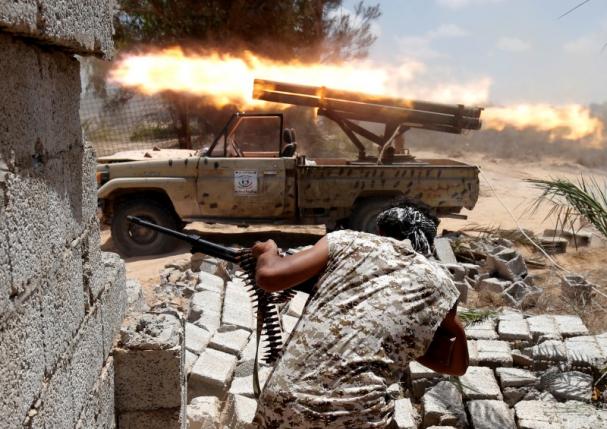 Libyan forces allied with the UN-backed government fire weapons during a battle with IS fighters in Sirte, Libya, July 21, 2016. REUTERS
TRIPOLI: Libyan forces battling to oust Islamic State from Sirte on Wednesday captured a large convention hall complex in the city centre, seizing a symbolic base where militants once held meetings and flew their black jihadist flag. Securing the Ouagadougou Conference Centre as well as hospital and university buildings would mark the biggest advance made by Libyan forces in weeks. The United States 10 days ago began air strikes on Sirte, which fighters say hastened their progress. "Our forces have complete control of the whole of the Ouagadougou complex, they even advanced some distance beyond the complex," Rida Issa, a spokesman in the forces' media office, said. Photos posted on the media office's Facebook page showed fighters with armed pickup trucks and a tank milling around next to the convention hall, which was pockmarked by shelling. The large domed building is a landmark in Sirte, hometown of late dictator Muammar Gaddafi, and was used for meetings and religious instruction by Islamic State (IS) after they took control of the city last year. Losing Sirte would be a major setback for the militants, already under pressure in Syria and Iraq. It would also be a boost for Libya's United Nations-backed government, which has struggled to impose its authority and faces ongoing resistance from hardline armed factions. Forces aligned with the government, which launched their campaign for Sirte in May, saw the advance slowed as they approached its centre. Led by brigades from the city of Misrata, the forces have suffered heavy casualties from IS landmines and snipers. Clashes have been sporadic, with heavier fighting interspersed with lulls lasting for several days. IS militants are encircled in the centre of Sirte but still control several residential areas, and the Misrata-led brigades have previously found it difficult to advance through neighbourhoods in house-to-house fighting. Since Aug. 1, US drones and fighter jets have carried out a total of 29 strikes, earlier this week targeting several IS emplacements and a gun-mounted pickup, according to statements by US Africa Command. In Wednesday's clashes, the government-backed forces said they had also advanced to a cluster of unfinished blocks just west of the centre of Sirte, known as the "bone buildings," which had been used by IS snipers and fighters had described as a major impediment to their progress. At least 16 fighters from the government-backed forces were killed and 11 wounded, Issa said. Earlier in the day, Libyan forces said they had lost a fighter jet over Sirte. Issa said the cause of the crash and the fate of the crew could not be confirmed. IS claimed it shot down the jet, killing a pilot, according to a statement on a website close to the group. POST-GADDAFI CHAOS Libyan militants returning from combat in Syria's civil war helped implant IS in the North African country in 2014, but the group failed to win widespread support or hold territory as most locals regard it as a malign import dependent on foreign fighters. The militant group took advantage of conflict between various factions of former rebels who emerged as powerbrokers after the fall of Gaddafi in 2011. The UN-backed government in Tripoli is the latest attempt to consolidate power and end the conflict. In addition to US air strikes, Libyan brigades in Misrata and Sirte have been working with small teams of Western special forces who have provided intelligence and logistical support as well as strategic advice. A few dozen members of Italy's elite special forces are in Libya to collect intelligence, provide non-combat "support" to government-backed forces and help other allies present in Libya, such as British or American special forces, a source said on Wednesday. The Italian government delivered a brief document outlining the special forces mission in Libya to the parliament's intelligence services oversight committee last week, said the source, who had knowledge of the document. La Repubblica newspaper reported that Italians were teaching Libyans how to diffuse land mines in Sirte. The defence minister and prime minister's offices did not respond to requests for comment.
#Islamic State #Libya #Libyan forces
You May Also like: