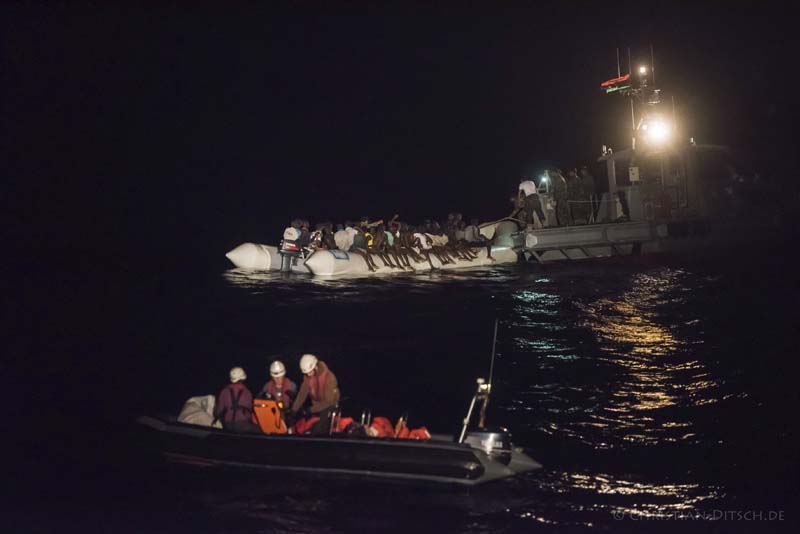 Refugees sit in a inflatable boat, background left, while a speedboat, labelled as Libyan Coast Guard, background right, and Sea-Watch members in a boat foreground arrive off the Libyan coast in the Mediterranean Sea, on October 21, 2016. Photo: AP
CAIRO: The Libyan navy said on Thursday that at least 90 migrants are believed to have perished when their rickety boat started to fall apart in the Mediterranean Sea, after leaving the Libyan coast.
The boat, which was made of rubber, tore and began filling with water about 42 kilometers (26 miles) off the Libyan coast, an area considered to be international waters, said the spokesman for the navy, Ayoub Gassim. The Libyan coast guard rescued 29 survivors, who recounted that there were 129 of them in all on the boat, mostly African nationals, Gassim said. The migrants left Tajoura, in western Libya, before dawn on Wednesday morning, and the coast guard received a call for help around 3 p.m. So far this year, the death toll for migrants in the Mediterranean has reached at least 3,800, making 2016 the deadliest year ever for migrants at sea. Migrants fleeing war and poverty increasingly take the dangerous journey from Libya to Italy on overcrowded boats, hoping to make their way to new lives in Europe. In a separate incident, Doctors Without Borders said on Wednesday that its personnel recovered the bodies of 25 migrants aboard an overcrowded inflatable raft in the Mediterranean. The bodies were discovered during the rescue of 246 people on two rafts, said the group, also known by its French acronym MSF. MSF field coordinator Michele Telaro said the victims likely died of fuel inhalation, and that the potent mixture of petrol and water hampered the recovery efforts during the operation, which took place on Tuesday. Twenty-three survivors were treated for chemical burns.

#Libya #Mediterranean Sea #Libyan coast #Tajoura
You May Also like: