Malaysia: North Korean's family may be scared to come forward 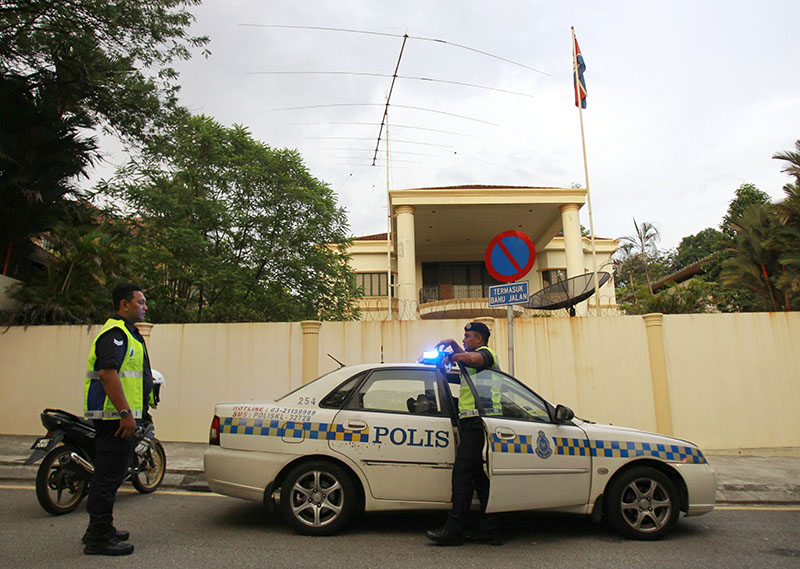 Police officers guard outside the North Korean Embassy in Kuala Lumpur, Malaysia, on Tuesday, March 7, 2017. Photo: AP
KUALA LUMPUR: Malaysia's prime minister said Wednesday that relatives of Kim Jong Nam, the long-exiled half-brother of North Korea's ruler, may be too scared to come forward to provide DNA samples following his mysterious poisoning death in a crowded airport terminal in Kuala Lumpur. Prime Minister Najib Razak spoke a day after a stunning breakdown in diplomatic ties between Malaysia and North Korea over the investigation into Kim's death on February 13. Najib said his country still wants to negotiate with Pyongyang despite the increasingly bitter dispute. "This is sensitive matter, best conducted in secrecy," he said, adding that authorities are still trying to get DNA samples from Kim's immediate family to formally identify his body. "Maybe they are scared to come forward," Najib said. Two women swiped Kim's face with VX nerve agent as he waited for a flight home to Macau last month, Malaysian authorities say. The investigation has infuriated North Korea, which has dismissed the inquiry as politically motivated. Many speculate that North Korea somehow orchestrated the attack, which it denies. Malaysia has never directly accused Pyongyang of being behind the hit. The dispute took a surprising turn on Tuesday, when North Korea announced that it was blocking all Malaysians from leaving the country until a "fair settlement" of the case. Malaysia responded in kind and barred North Koreans from exiting its soil. Deputy Prime Minister Ahmad Zahid Hamidi said Wednesday that Malaysia is willing to negotiate. "So far, we believe they are going to act rationally," he said. "We believe what is important for us is to maintain our diplomatic relationship with them because I think what is important is the safety of our citisens in Pyongyang." Najib has denounced North Korea's order "an abhorrent act, effectively holding our citisens hostage" and a violation of international law. "I can't think of anything like this" happening for years, said Lalit Mansingh, a New Delhi-based scholar and longtime top Indian diplomat, said of North Korea's directive. "This is way out of normal diplomatic practice." But North Korea has a long history of surprising the international community. "It's the North Korean way of doing things — dramatic intimidating gestures and then waiting for the other side to plead for some concessions," said Leszek Buszynski, a national security scholar at Australian National University who has written extensively on North Korean diplomacy. Officials in Kuala Lumpur say there are 11 Malaysians currently in North Korea: three working at the embassy, two U.N. employees and six family members. About 1,000 North Koreans are believed to be in Malaysia, until recently one of the few countries where North Koreans could travel without a visa. North Korea's surprise order came Tuesday morning, when the official Korean Central News Agency said the country was banning Malaysians from leaving "until the safety of the diplomats and citisens of (North Korea) in Malaysia is fully guaranteed through the fair settlement of the case." It was not clear, however, what would constitute a "fair settlement." North Korea said Malaysia's diplomats and citisens "may work and live normally" during the temporary exit ban. Malaysia is searching for seven North Korean suspects in connection with Kim's assassination, including a North Korean diplomat. Police say three suspects are believed to be in hiding at the North Korean Embassy in Kuala Lumpur, a hulking concrete mansion behind a wall streaked with water stains. National police chief Khalid Abu Bakar said Malaysia would not raid the embassy, which is protected under diplomatic law, but would wait for the suspects to emerge. "We will wait. We will wait, and if it takes five years we will wait outside. Definitely somebody will come out," Khalid said. Malaysia has said the two women who poisoned Kim were recruited by a team of North Koreans. A Malaysian autopsy found that Kim was killed with VX, a nerve agent and banned chemical weapon that causes convulsions and leaves victims unable to breathe. North Korea is widely believed to possess large quantities of chemical weapons, including VX. The women, one from Vietnam and the other from Indonesia, were quickly caught and have been charged with murder. Both say they were duped into thinking they were playing a harmless prank. Custody of the body has become a flashpoint. Malaysia says it needs to conduct DNA tests to formally identify the body, but North Korea says it has no right to keep the body of a North Korean citisen. Kim, who was in his mid-40s, had lived abroad for years and had reportedly never met younger half-brother, North Korean ruler Kim Jong Un.
#Malaysia #DNA samples #North Korea #Prime Minister Najib Razak #Malaysia's prime minister #Kim Jong Nam #VX nerve agent #North Korea's ruler
You May Also like: