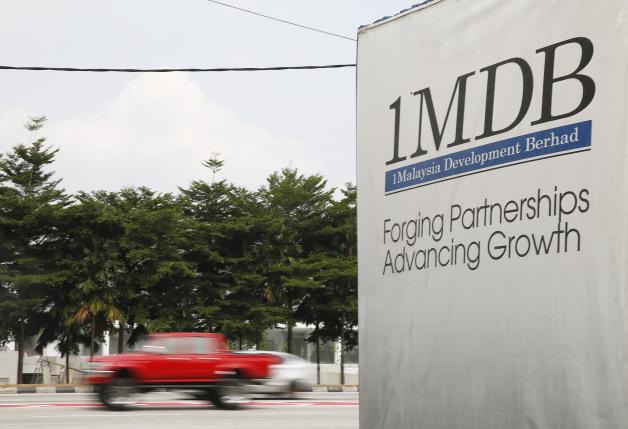 Traffic passes a 1Malaysia Development Berhad (1MDB) billboard at the Tun Razak Exchange development in Kuala Lumpur, Malaysia, July 6, 2015. REUTERS
KUALA LUMPUR: Malaysian police raided the office of troubled state investment fund 1MDB on Wednesday, following a report that claimed investigators looking into the firm found nearly $700 million had been transferred to Prime Minister Najib Razak's bank account. The Wall Street Journal (WSJ) reported last week that investigators probing 1MDB had traced money from the debt-laden fund to Najib's personal account. Najib has denied taking any money from 1MDB or any other entity for personal gain, and is considering legal action. "We can confirm that a number of officials from the task force, conducting an enquiry into 1MDB, visited our offices today," 1MDB said in a statement. "They were provided with a number of documents and materials to aid with the investigations currently taking place." A police spokeswoman confirmed the raid, but did not give any further details. A task force investigating 1MDB said on Tuesday it had frozen half a dozen bank accounts in relation to the allegations, suggesting that it was taking the report seriously, but did not specify whose accounts they were or name the banks. The team, which includes Malaysia's attorney-general, the central bank governor, the inspector-general of police and the head of the anti-corruption commission, also took possession of documents related to 17 accounts from two banks to help with investigations. 1MDB, a property-to-energy group whose advisory board is chaired by Najib, has debts of around $11 billion. Even before the WSJ report it was the subject of separate investigations by the central bank, auditor general, police and the parliament's Public Accounts Committee. The Wall Street Journal report, citing documents from a government investigation, said there were five deposits into Najib's account. The two largest transactions, worth $620 million and $61 million, were made in March 2013 during the election campaign, the paper said. It said they came from a company registered in the British Virgin Islands via the Singapore branch of a Swiss private bank. Reuters has not independently verified the WSJ report. The Monetary Authority of Singapore (MAS) said on Wednesday that it would provide assistance to Malaysia and share information where it was legally able to. LEGAL COURSE The financial furore surround 1MDB threatens to blow up into the country's biggest political crisis and has spooked financial markets. The ringgit is trading at a 16-year low against the dollar and has weakened past the old currency peg of 3.80 per dollar, fixed in September 1998 during the Asian financial crisis and scrapped in 2005. The benchmark stock index dropped to its lowest in a week. 1MDB bonds also took a hit following the raid. The 4.4 percent 2023 bonds are trading down 2 points at 82 cents on the dollar. Najib's law firm, Hafarizam Wan & Aisha Mubarak said in a statement on Wednesday that it had been instructed to consider action against WSJ. "Once our client has obtained all necessary facts and the position of WSJ is ascertained, we have strict instructions to immediately exhaust legal avenues and remedies," it said. A spokeswoman for Dow Jones & Co., which publishes the Wall Street Journal, said: "We stand behind our fair and accurate coverage of this evolving story." Opposition lawmakers have pressed cabinet ministers for a full explanation into the allegations, and asked him to go on leave until a probe is completed. Members of Najib's party, the United Malays National Organisation (UMNO), have closed ranks behind the prime minister, who had already been on the back foot over alleged mismanagement of 1MDB and his handling of the economy. "I think the cabinet was very united in that we have to allow for due process to take its course," Khairy Jamaluddin, the youth and sports minister, told reporters after a cabinet meeting in Malaysia's administrative capital Putrajaya. 1MDB has described the allegations as "unsubstantiated", saying it never provided funds to the prime minister.
#Malaysia #legal action #1MDB office #Najib #report
You May Also like: