Man sets self on fire on Japanese bullet train 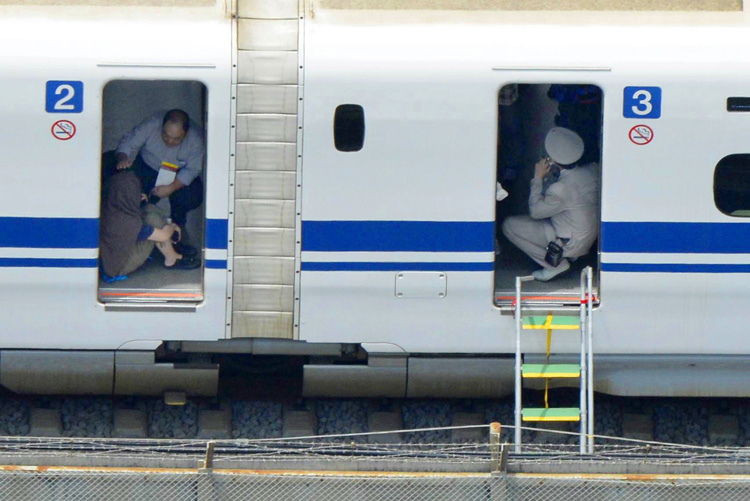 A passenger, left, crouches inside a train car of the bullet train which made an emergency stop in Odawara, west of Tokyo Tuesday, June 30, 2015. A passenger poured oil and set himself or herself on fire, causing fire and smoke in the car. Photo: Kyodo News via AP
ODAWARA: A man riding a Japanese high-speed bullet train set himself on fire today, killing himself and another passenger as the coach filled with smoke, a fire official said. At least 26 other people were injured, three seriously, mostly from smoke inhalation, Odawara Fire Department official Ikutaro Torii said.

A passenger, left, crouches inside a train car of the bullet train which made an emergency stop in Odawara, west of Tokyo Tuesday, June 30, 2015. A passenger poured oil and set himself or herself on fire, causing fire and smoke in the car. Photo: Kyodo News via AP
The man’s motive wasn’t clear. The passenger poured an oil-like substance over his head before setting himself on fire, authorities said. Kyodo News service reported that he used a lighter. Officials said the fire was at the front of the first car in the train, which was heading from Tokyo to Osaka. “I said to myself, ‘This is bad!’” said Takeo Inariyama, a 54-year-old businessman travelling in the second car. “I saw everyone running towards me and smoke coming. Also the smell (of smoke) filled the car. So I felt my life was in danger.” The train stopped on the outskirts of Odawara city, about 80 km west of Tokyo, when a passenger pressed an emergency button after finding someone collapsed on the floor near a restroom at the back of the first car, a transport ministry official said on condition of anonymity, citing department rules. The passenger on the floor, a woman, was later pronounced dead, reportedly from inhaling smoke. Crew members rushed to extinguish the fire, said Kengo Sasaoka, a spokesman for Central Japan Railway Co, which operates the bullet train between Tokyo and Osaka. TBS television broadcast a video of passengers evacuating the smoke-filled coach, some coughing, others covering their faces with towels and handkerchiefs. Witnesses provided somewhat varying accounts to Japanese networks. One passenger, in a telephone interview with TBS, said the man approached him when he was standing outside the driver’s compartment and told him to stay away because it would be dangerous, then poured an orange-coloured liquid over himself. Public broadcaster NHK quoted a 58-year-old businessman as saying the man walked up and down the aisle a few times before returning with a plastic container that splashed a liquid on the businessman’s shoulder as he walked by. The man then started dumping the liquid on the floor, and the businessman quickly left as he smelled gasoline, he said. Bringing hazardous materials on public transportation is prohibited, but there is no way of checking, railway analyst Ryozo Kawashima told NHK. Bullet train service between Tokyo and Osaka was suspended for about two and a half hours while rescue workers helped some of the injured off the train. The train then moved slowly to Odawara station, where about 1,000 passengers got off. The 16-car bullet train, called the Shinkansen in Japanese, travels the 553 km between Tokyo and Osaka in two hours and 33 minutes.
#Japan #high-speed bullet train
You May Also like: