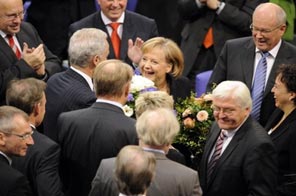 German lawmakers have formally re-elected Angela Merkel for a second four-year term as chancellor, this time at the head of a new centre-right coalition. Source: AFP

BERLIN: German lawmakers on Wednesday formally re-elected Angela Merkel for a second four-year term as chancellor, this time at the head of a new centre-right coalition.

In general elections on September 27, Merkel, 55, was able to ditch her previous partners, the centre-left Social Democrats (SPD), in favour of a tie-up of her conservatives with the pro-business Free Democrats (FDP).

"I accept the result and thank you for your trust," she said, as lawmakers applauded and presented her with bouquets of flowers in the main chamber of the Reichstag parliament building.

Out of the 612 MPs present in Germany's lower house on Wednesday, the Bundestag, 323 voted in favour of Merkel, with 285 against and four abstentions. Her Christian Democrats (CDU/CSU) and the FDP hold 332 seats.

The new government has pledged to make Germany, Europe's biggest economy, emerge from the global recession in better shape than before the financial crisis sent it into its worst recession since World War II.

It has promised 24 billion euros (35.6 billion dollars) worth of tax cuts, something that will push Germany's mammoth national debt still higher and put it in breach of European Union deficit rules for several years to come.

Merkel has ruled out large reductions in government spending, however, saying this could jeopardise Germany's fragile recovery, and that the economic growth that tax cuts will trigger will eventually help cover the cost.

Germany, one of the world's biggest exporters, has been hit harder than many advanced economies by the global downturn, with output set to contract by around five percent this year.

Merkel's new cabinet was due to hold it first meeting on Wednesday afternoon.

#Merkel formally re-elected by MPs
You May Also like: