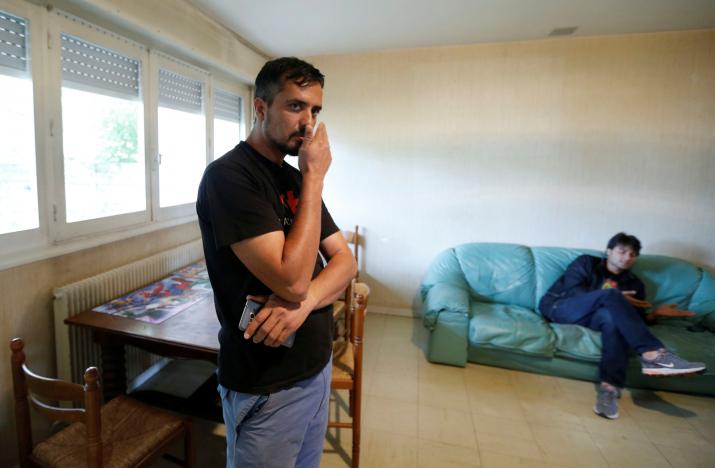 File- Qadri Fazlullah, a migrant from Afghanistan, poses inside the receptioin centre in Merignac, a suburb of Bordeaux, southwestern France, October 13, 2016, where he lives after resettling three months ago from the Calais jungle camp. Photo: REUTERS
MERIGNAC: In a dank flat in southwestern France, 23-year-old Nasir stares at a living room wall bare except for a list of emergency numbers and contemplates life for his asylum-seeking family outside the migrant camp in Calais that had become home. Nasir volunteered his family for resettlement days before France is expected to begin dismantling the violence-ridden camp in Calais known as the "Jungle", where disease is rife and traffickers prey on individuals desperate to reach Britain. The two-story apartment block in Merignac, a gray suburb on the outskirts of Bordeaux, is one of about 160 so-called reception centers where President Francois Hollande's Socialist government plans to re-house temporarily the Jungle's dwellers. There are few signs of the social workers Nasir is told will visit frequently, but Merignac's town hall has given the family food vouchers worth 80 euros for the week. "We feel good. It looks like someone cares a little bit about us," Nasir said in broken English. "We'll watch TV here. We'll rest!" Not everyone supports President Francois Hollande's plans for the Jungle's closure. Many of the nearly 10,000 migrants aid agencies estimate are holed up in the camp still target Britain, and a group of charities this week sought a court injunction to block the camp's demolition. Amid a fiery debate on immigration and border controls ahead of a presidential election next year, opponents have turned up the heat on Hollande's immigration policy. Hollande has been at pains to find a solution to the Jungle, which has become a symbol of the European Union's struggle to stem the inflow of migrants as its member-states bicker over who should take responsibility. Anti-immigrant sentiment is on the rise in France, reflected in the growing popularity of the far-right National Front. Gunshots have been fired at two planned reception centers and one mayor wanted to hold a local referendum on whether to accept his town's quota of migrants, exposing the resistance in parts of the country to Hollande's plans for the Calais migrants. CAUTIOUS WELCOME In Merignac, run by a left-wing mayor, residents living near the social housing block that once housed local teachers voiced wary sympathy for the resettled migrants. "We've lost all perspective. I'm not bothered as long as they don't mess things up for us here," said bar owner Pascal Thieblemont. Merignac mayor Alain Anziani acknowledged local anxieties. He said the 32 places his municipality was making available would not be located at a single site. "We don't want to create a ghetto," said Anziani, adding some residents had expressed concern their housing needs would come second to the migrants. Under the government plan Anziani said the migrants would spend on average two months at the reception center to rest, receive medical checks and recover from their months-long ordeal in the Jungle before being relocated to await the outcome of their asylum demands - requests which could be rejected. Yet in a sign the process may not prove smooth, Nasir's neighbour Fazlullah Qadri said he had been waiting three months at the reception center without any word on his refugee status. Qadri flicked through photographs of corpses and beheaded bodies in his home city of Jalalabad in eastern Afghanistan. "Look, I know this person," he said intermittently. "I have these dreams at night. I still can't sleep." In the early afternoon the shutters in Nasir's flat are still down and curtains closed. He says his 21-year-old wife Nabila isn't ready to venture outside the flat, though he has. "It was great, no one came up to tell me what to do," Nasir beamed, talking enthusiastically about his plans to learn French and read books on European cities. But his first priority is his wife. "We need to see a doctor. She still has a bullet stuck near her heart dating from when she was a youngster in Afghanistan."
#France #President Francois Hollande #asylum-seeking family #camp in Calais #Merignac
You May Also like: