'More candidates to be banned' 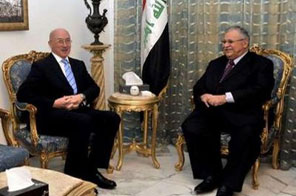 BAGHDAD: The head of Iraq's electoral commission says he expects more names will be added to a list of candidates banned from running in the parliament elections in March.

Faraj al-Haidari told The Associated Press on Friday that additional names could be released as early as Saturday, and will likely include military men who carried forged documents and people with criminal records.

A leaked list containing more than 500 names thought to be banned by a government-sanctioned committee over suspected ties to Saddam Hussein's regime was printed in Iraqi newspapers on Thursday.

Al-Haidari declined to discuss names on that list but said they include members of Iraq's various sects and ethnic groups. He says the number of Sunnis and Shiites is roughly equal.

#'More candidates to be banned'
You May Also like: