Most Myanmar citizens overseas left out of historic vote 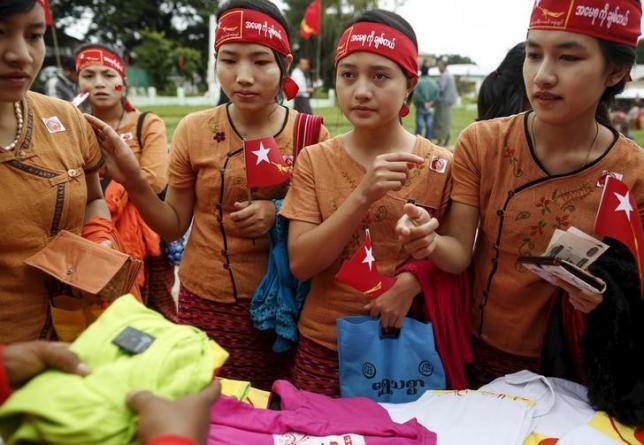 Ethnic Intha women buy shirts with National League for Democracy (NLD) party logo as they wait for the arrival of pro-democracy leader Aung San Suu Kyi at the Hopong township in Shan state, Myanmar September 6, 2015. REUTERS
YANGON: Red tape and confusion prevented all but a few thousand of more than two million Myanmar citizens working overseas to sign up to vote in the first free elections since the end of military rule, leaving the vast majority without a voice. Workers and activists blamed bureaucracy, uncertainty over the deadline and a lack of documentation, adding that Myanmar embassies made little effort to inform potential voters about the Nov. 8 election. Opposition leader Aung San Suu Kyi's National League for Democracy is expected to win the vote, which marks a major shift in Myanmar's political landscape, giving the platform to democratic activists shut out of public life during nearly half a century of strict military rule that ended in 2011. It was not immediately clear what the low registration will mean to the result, but given that most of those overseas fled military rule, they would be unlikely supporters of the ruling, army-backed Union Solidarity and Development Party. Migrants had to provide a range of official documents to verify they had the right to vote, including a printed copy of their local ward voter list – a document nearly impossible to obtain for most labourers, activists said. "It’s easier said than done to get a copy of the voter list in time," David Than, a Myanmar engineer working in Singapore, told Reuters by phone. Fewer than 19,000 overseas voters managed to register before the deadline. The number of Myanmar citizens living overseas according to the 2014 census stands at just over 2 million. A similar number of overseas workers is registered with the labour ministry. But the real number of Myanmar workers abroad is likely to be much higher, with an estimated 10 percent of the population living abroad, according to the International Organization for Migration's data from mid-2014. The IOM said that a large proportion of migrants were undocumented. Millions of Myanmar citizens fled poverty, harassment and war in a country ran for 49 years by a regime that reduced the economy to shambles, destroyed livelihoods and forced people to seek better opportunities elsewhere. Since 2011, the semi-civilian government of President Thein Sein has introduced reforms and opened up the economy, encouraging some to come back, but millions remain abroad - mostly working on plantations, in restaurants and as garment factory workers in neighbouring Thailand. "Many workers here have their passports taken away from them and kept by their employers," said Kyaw Thein, an activist looking after the rights of Myanmar workers in Thailand. Passports are also needed to register for voting. Bureaucratic chaos also contributed to the low registration rate. The Foreign Ministry set the deadline for late August, while the Union Election Commission later said that deadline was tentative and it would have accepted applications submitted later. Registered Myanmar citizens abroad will vote on Oct. 17.
#myanmar #vote
You May Also like: