Mousavi to issue report on 'fraud' 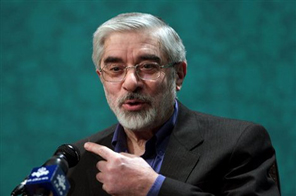 A Mousavi campaign committee "will soon release a full report of electoral fraud and irregularities to the people," a statement posted on Mousavi's official website Kalemeh.ir said.

The statement came after the Guardians Council ruled out annulling the results of the election, which showed Mousavi losing heavily to incumbent President Mahmoud Ahmadinejad.

#Mousavi camp to issue report on Iran vote 'fraud'
You May Also like: