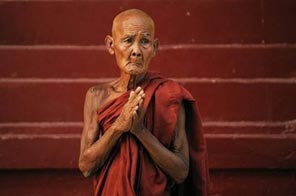 A report from Human Rights Watch (HRW) said around 240 monks were serving tough prison terms, while thousands have been disrobed or live under "constant surveillance" following their leading role in the 2007 demonstrations.

The protests began as small rallies against the rising cost of living but escalated into huge demonstrations led by crowds of monks that posed the biggest challenge to junta rule in nearly two decades.

The new report said the potential for a repeat of the protests is "very real" if the international community does not put pressure on the regime to enact credible political reform ahead of elections planned for 2010.

It details the arrest, beating and detention of individual monks after the 2007 uprising, in which at least 31 people were killed as security forces cracked down on protesters in the country formerly known as Burma.

The junta has since closed down health and social service programmes run by local monastic groups across the country and intensified surveillance of monasteries, according to the report.

It said many monks -- who also face repression for their important social service role after the devastation of Cyclone Nargis in 2008 -- have left their monasteries and returned to their villages or sought refuge abroad.

The cyclone killed 138,000 people and prompted international criticism of the government's slow response.

"The stories told by monks are sad and disturbing, but they exemplify the behavior of Burma's military government as it clings to power through violence, fear, and repression," said Brad Adams, Asia director at Human Rights Watch.

"The monks retain a great deal of moral authority, making principled stands by monks very dangerous for a government that doesn't."

Meanwhile the rights group accused the junta of using Buddhism as a tool to gain political legitimacy -- for example by lavishing gifts on selected senior monks and monasteries.

"It would not be surprising to see monks on the streets again if social grievances are not addressed," Adams added.

On Friday Myanmar authorities freed two journalists who helped victims of last year's cyclone and released several opposition activists as part of an amnesty for more than 7,000 prisoners, according to witnesses.

Their release followed another HRW report on Wednesday that said the number of political prisoners in Myanmar had doubled to more than 2,200 in the past two years.

UN chief Ban Ki-moon welcomed the release of prisoners but urged the junta to free those still being held, including opposition leader Aung San Suu Kyi.

#Myanmar junta repressing monks yet
You May Also like: