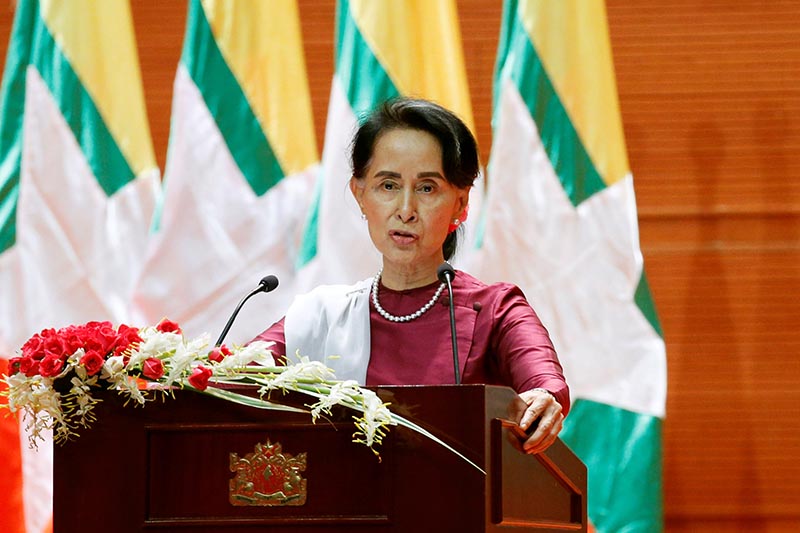 NAYPYITAW: Myanmar leader Aung San Suu Kyi condemned all human rights violations on Tuesday and said anyone responsible for abuses in troubled Rakhine State would face the law, and she felt deeply for the suffering of everyone caught up in conflict there.

In her first address to the nation since attacks by Rohingya Muslim insurgents on Aug. 25 sparked a military response that has forced more than 410,000 Rohingya into Bangladesh, Suu Kyi said Myanmar did not fear international scrutiny and was committed to a sustainable solution to the conflict.

The United Nations has branded the military operation in the western state ethnic cleansing. Suu Kyi did not address that accusation but said her government condemned rights violations and anyone responsible for abuses would face the law.

"We condemn all human rights violations and unlawful violence. We are committed to the restoration of peace and stability and rule of law throughout the state," Suu Kyi said in her address in the capital, Naypyitaw.

Long feted in the West for her role as champion of Myanmar’s democratic opposition in the Buddhist-majority country during years of military rule and house arrest, Suu Kyi has faced growing criticism for saying little about the abuses faced by the Rohingya.

"Human rights violations and all other acts that impair stability and harmony and undermine the rule of law will be addressed in accordance with strict laws and justice," she said.

"We feel deeply for the suffering of all the people caught up in the conflict."

The United States urged the Myanmar government on Monday to end military operations in Rakhine state, grant humanitarian access, and commit to aiding the safe return of civilians to their homes.

Myanmar's powerful military remains in full charge of security and Suu Kyi did not comment on the military operations except to say that since Sept. 5, there had been "no armed clashes and there have been no clearance operations".

"Nevertheless, we are concerned to hear that numbers of Muslims are fleeing across the border to Bangladesh," she said.

"We want to find out why this exodus is happening. We would like to talk to those who have fled as well as those who have stayed. I think it is very little known a great majority of Muslims in the Rakhine state have not joined the exodus."

She said her government had been making every effort to restore peace and stability and to promote harmony between the Muslim and largely Buddhist Rakhine communities.

Suu Kyi, 72, is banned from the presidency by the military-drafted constitution because her children have British citizenship. She holds offices of the state counsellor and minister for foreign affairs, and is the de facto leader of the administration.

In her address, Suu Kyi did not use the term “Rohingya” to refer to the Muslim minority in Rakhine State.

Members of the 1.1 million group, who identify themselves by the term Rohingya, are seen by many Myanmar Buddhists as illegal immigrants from Bangladesh. The term is a divisive issue.

Most Rohingya do not have Myanmar citizenship.