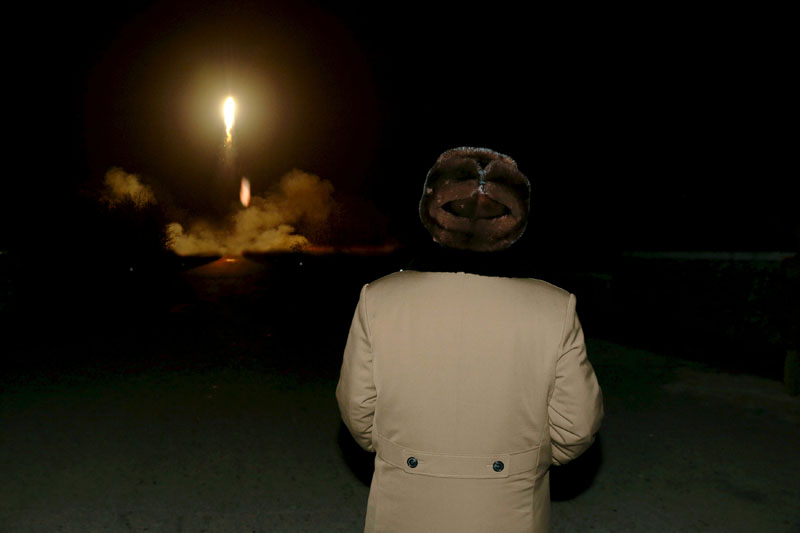 FILE PHOTO: North Korean leader Kim Jong Un watches the ballistic rocket launch drill of the Strategic Force of the Korean People's Army (KPA) at an unknown location, in this undated file photo released by North Korea's Korean Central News Agency (KCNA) in Pyongyang on March 11, 2016. Photo: REUTERS/File
SEOUL: North Korea leader Kim Jong Un said after supervising the test launch of a "medium long-range strategic ballistic missile" that the country now has the capability to attack US interests in the Pacific, official media reported on Thursday. South Korean and US military officials have said the North launched what appeared to be two intermediate-range missiles dubbed Musudan on Wednesday. The first of the two was considered a failure. The second reached a high altitude in the direction of Japan before plunging into the sea about 400 km (250 miles) away, they said. The test-fire was successful without putting the security of neighbouring countries at risk, the North's KCNA news agency said, referring to the missile as a "Hwasong-10." Hwasong is Korean for Mars. "We have the sure capability to attack in an overall and practical way the Americans in the Pacific operation theatre," KCNA quoted Kim as saying. The missile, which is fired from mobile launchers, has a design range of more than 3,000 km (1,860 miles), meaning all of Japan and the US territory of Guam are potentially within reach. South Korea and the United States condemned the launch as an unacceptable violation of UN Security Council resolutions. Japan's Defence Minister Gen Nakatani said the launch was an indication that North Korea's threat to Japan was intensifying. The United Nations Security Council, which in March imposed new sanctions on the North following its fourth nuclear test in January and a long-range rocket launch in February, met at the request of the United States and Japan. Alexis Lamek, Deputy UN Ambassador of France, which holds the Security Council presidency for June, said after the meeting all 15 members believed the launches were in violation of UN resolutions. "All expressed a strong concern as well as their opposition (to) these launches," Lamek told reporters. He said he hoped a statement condemning the move could be agreed on soon. UN Secretary-General Ban Ki-moon, speaking before the Security Council meeting, described North Korea's latest ballistic missile launches as a "brazen and irresponsible act". US Defense Secretary Ash Carter said he did not know if the test was a success but acknowledged one of the two missiles "flew for a long time". North Korea had failed in at least five previous attempts to launch the intermediate-range missiles. South Korea said Washington and Seoul were analysing whether the sixth missile launch was successful. Japan and South Korea said the missile flew at a height of 1,000 km (620 miles) over a distance of 400 km (250 miles) off its east coast. Experts said it appeared North Korea had deliberately raised the angle of the launch to avoid hitting any territory of Japan. North Korea is believed to have up to 30 Musudan missiles, according to South Korean media, which officials said were first deployed around 2007, although the North had never attempted to test-fire them until this year.
#North Korea #United Nations Security Council #Kim Jong Un #ballistic missile #Musudan
You May Also like: