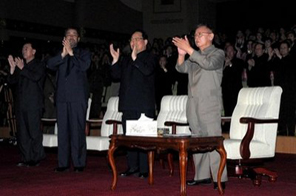 SEOUL: Kim Jong-Il has hosted a dinner party for the new Chinese ambassador to North Korea, state media said Sunday, amid reports the reclusive leader was set to visit Beijing.
The dinner on Saturday was attended by top North Korean military and party officials, the country's official Korean Central News Agency said.
When Kim appeared with new Chinese ambassador Liu Hongcai, "all the participants warmly welcomed him with highest tribute", it said.
"They expressed the steadfast will of the parties and peoples of the two countries to further develop and consolidate generation after generation," the agency said.
The dinner fuelled speculation that Kim's anticipated visit to Beijing is being delayed, the South's Yonhap news agency said. But local television reports did not rule the possibility of a trip this week.
South Korean officials said last week there was a "high level of possibility" that Kim would soon visit China. Kim previously travelled by train to China in 2000, 2001, 2004 and 2006. He reportedly dislikes flying.
Yonhap quoted intelligence officials in Seoul last week that an advance team of North Korean officials may already be in China to arrange Kim's trip.
Analysts say such a trip would be aimed at seeking badly needed economic aid from China, and the North in return may feel bound to return to long-stalled six-nation nuclear disarmament talks.
China is North Korea's major ally and its most important source of food and energy.
"KCNA's report clearly suggests Kim is still in Pyongyang. I believe the report is aimed at dispelling rampant speculation about him," Kim Yong-Hyun, a professor at Dongguk University in Seoul, told AFP.
"Yet Kim's trip to Beijing is still possible this week or later," he added.
The North angrily quit the talks in April last year and vowed to restart production of weapons-grade plutonium. It carried out its second atomic weapons test the following month.
Pyongyang says it will not go back to the nuclear dialogue until United Nations sanctions are lifted, and until the United States makes a commitment to hold talks on a formal peace treaty.
North Korea had agreed in previous rounds of the six-nation talks to end its nuclear weapons drive in return for security guarantees and badly needed fuel assistance.
The talks involve China, Japan, the two Koreas, Russia and the United States.

#N.Korea's Kim hosts banquet amid China visit hopes
You May Also like: