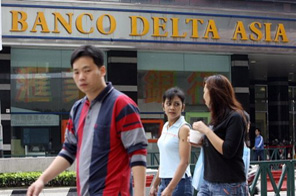 SEOUL: North Korea is rushing to withdraw money from its overseas bank accounts after the United Nations imposed financial and other sanctions for its nuclear test, a report said Wednesday.
South Korea's Dong-A Ilbo newspaper, quoting sources in Beijing, said the North had begun withdrawing funds from accounts in Macau and elsewhere for fear they would be frozen.
The paper said funds were being pulled out of almost all the communist state's foreign accounts held either by individuals or trading firms. It gave no details.
The National Intelligence Service was not immediately available for comment.
Security Council Resolution 1874 passed last Friday calls on UN member states to expand sanctions first imposed on the North after its initial nuclear test in 2006.
It calls for tougher cargo inspections, a tighter arms embargo and new targeted financial restrictions to choke off revenue for Pyongyang's nuclear and missile sectors.
Last week, before the resolution was passed, South Korea's Chosun Ilbo newspaper said Seoul had given Washington details of 10-20 bank accounts held by North Koreans in China, Switzerland and elsewhere.
It said the accounts were suspected of being used for transactions related to counterfeiting, drug dealing and money laundering.
In 2005 the US Treasury Department blacklisted Macau's Banco Delta Asia (BDA) on suspicion of money-laundering and handling North Korea's counterfeit notes.
The move effectively froze Pyongyang's access to some 25 million dollars in BDA and led other nations to cut off financial dealings with the North.
The US freed the BDA funds in 2007 amid progress on a six-nation nuclear disarmament pact, which has now effectively collapsed.

#NKorea cleans out foreign accounts
You May Also like: