NKorea gets defiant over nukes 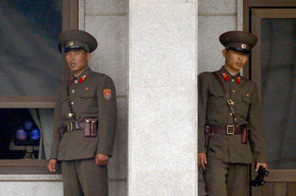 North Korean soldiers look at the South side at the truce village of Panmunjom in the demilitarised zone dividing two Koreas on June 9, 2009. North Korea said it would use its nuclear weapons both to defend itself and to carry out a merciless reprisal for any attack by its enemies. Source: AFP

SEOUL: North Korea said Tuesday it would use nuclear weapons in a "merciless offensive" if provoked, in its latest bellicose rhetoric apparently aimed at deterring any international punishment for its recent atomic test blast.
It appeared to be the first time that North Korea referred to its nuclear arsenal as "offensive" in nature. Pyongyang has long claimed that its nuclear weapons programme is only for self-defence against what it calls U.S. attempts to invade it.
"Our nuclear deterrent will be a strong defensive means ... as well as a merciless offensive means to deal a just retaliatory strike to those who touch the country's dignity and sovereignty even a bit," Pyongyang's state-run Minju Joson newspaper said in a commentary, carried by the official Korean Central News Agency.
North Korea often refers to its atomic arsenal as a nuclear deterrent.
The tough talk came as the U.N. Security Council seeks a way to punish the North for its May 25 nuclear test with tough sanctions.
The U.S. is pressing for new U.N. action aimed at cutting off the North's ability to peddle its nuclear wares, including an arrangement to interdict air and sea shipments of nuclear materials and hardware to and from the North.
North Korea has bristled at any talk of sanctions. On Monday, Pyongyang's main Rodong Sinmun newspaper said the country will consider any sanctions a declaration of war and will respond to it with "due corresponding self-defense measures." It did not elaborate on what those measures will be. But the country has been preparing to test-fire an intercontinental ballistic missile capable of reaching the U.S. It has also shown signs of launching a flurry of short- and medium-range missiles.
Intensifying its confrontation with the U.S., North Korea handed down 12-year prison terms to two detained American journalists.
Analysts have said Pyongyang is expected to use the reporters as a bargaining chip in nuclear and other negotiation with the U.S.

#NKorea gets defiant over nuke crisis
You May Also like: