Nobel physics prize: A look at the 3 winners, their feats 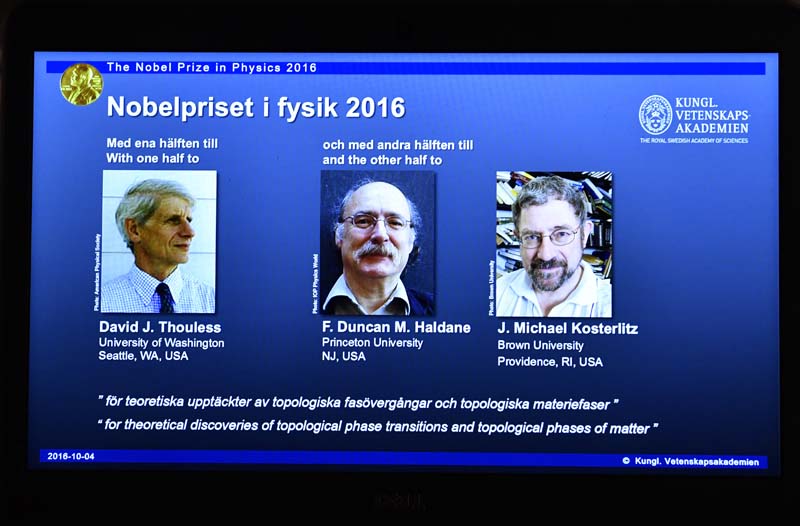 A overhead projector displays the photos of the winners of the Nobel Prize in physics, at the Royal Swedish Academy of Sciences, in Stockholm, Sweden, on Tuesday, October 4, 2016. Photo: AP
STOCKHOLM: Three British-born scientists who have conducted extensive research in the United States have won this year's Nobel Prize in physics.
They are David Thouless (82) a professor emeritus at the University of Washington; Duncan Haldane (65)  a physics professor at Princeton University in New Jersey, and 73-year-old Michael Kosterlitz of Brown University in Rhode Island. Here's a look at why they won and the importance of their achievements: Significance Their research broke new ground in the 1970s and 1980s and is being honoured decades later as recognition of its lasting impact. The Royal Swedish Academy of Sciences said the trio "opened the door" to a new, previously hidden world in which matter takes unusual states. The academy said their elegant theoretical discoveries had inspired scientists in the intervening years. They are credited with groundbreaking work revealing the secrets of exotic matter such as superconductors, materials that conduct electricity with no loss to resistance. This may lead to the development of new materials for use in advanced electronics or computers. Reaction A very pleased Haldane took several questions by phone link from journalists covering the Nobel ceremony. He said the laureates "stumbled" onto the discoveries that would bring them global recognition decades later and said that was often the way new finds are made. He also paid tribute to the motivation provided by Philip Anderson, an earlier Nobel winner who was one of his professors at Cambridge University. Haldane said he was "very surprised and very gratified" by the award. Prize The Nobel Prize carries with it an 8 million kronor ($930,000) prize in addition to a medal and a diploma that is handed out at the award ceremonies each December.