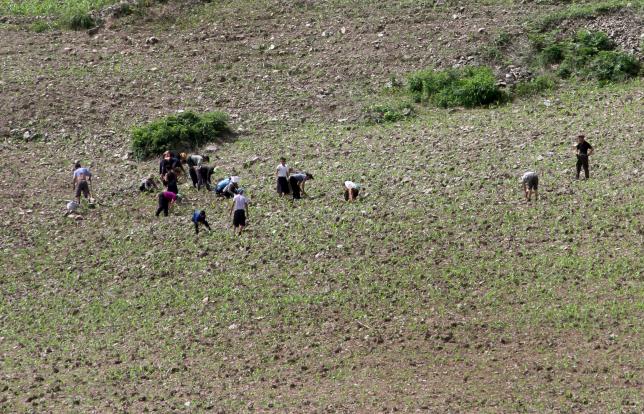 North Koreans farm in the field, along the Yalu River, in Sakchu county, North Phyongan Province, North Korea, June 20, 2015. REUTERS
SEOUL: North Korea received enough rainfall in June to ease drought conditions that had been described by Pyongyang as the worst in a century, although parts of the country remain acutely short of water, the South Korean government said on Friday. The North's official media said in mid-June the country had been hit by the worst drought in 100 years. The lack of rain is believed to have compounded chronic food shortages in North Korea, which has seen external aid decline in recent years. "We believe the drought was eased considerably in June," South Korea's Unification Ministry spokesman Jeong Joon-hee told a news briefing. "Rainfall in June rose to almost 90 percent of the average year so it should have eased considerably." Jeong said rainfall in May was about half the average year. The North's KCNA news agency said in June that paddies around the country - including in the main rice farming regions of Hwanghae and Phyongan provinces in the south - were drying up due to the lack of rainfall, causing great damage. Jeong said drought continued in Hwanghae and some of the northern provinces. The shortage of rainfall in May prompted the U.N. resident coordinator for North Korea, Ghulam Isaczai, to warn of a looming food crisis, especially after rains in 2014 were the lowest in records going back 30 years. North Korea's farm production periodically suffers from droughts and floods in the summer, but experts said the state has learned to cut damage and starvation by updating farming methods and allowing the emergence of grassroots markets and an unofficial economy that promotes food trade.
#rainfall #North Korea #drought
You May Also like: