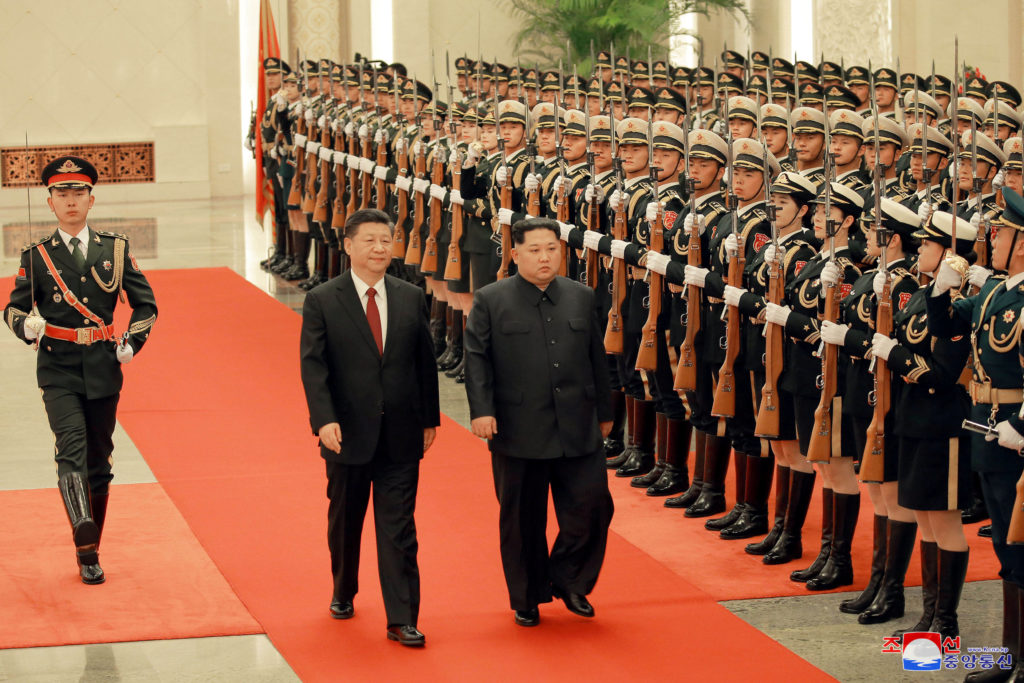 SEOUL/BEIJING: Accompanied by his wife, greeted by honor guards, and entertained at banquets, Kim Jong Un made his international debut as North Korea’s leader by being wined and dined in the capital of the world’s most populous country.

Kim’s “unofficial” visit to China this week marks his first known trip outside the North since taking power in late 2011, and it helped burnish the image he has recently been cultivating as a leader who has to be shown respect by the world’s most powerful.

Despite recent chilly relations between the neighbors, Chinese President Xi Jinping rolled out an actual red carpet for Kim, who arrived from Pyongyang in a 21-car bulletproof train.

“Just look at Kim’s big smile on his face while he’s shaking hands with Xi,” said Kim Yong-hyun, professor of North Korean studies at South Korea’s Dongguk University. “Although it was Kim’s first trip outside North Korea since he took power, he looked quite confident, posing himself as a world player equal to China’s Xi.”

In line with the previous three visits by Kim’s father to China, the Chinese government described the trip as unofficial, with no North Korean flags hung around Beijing’s Tiananmen Square as happens with state visits.

But Chinese state television gave similar coverage to Kim’s meetings with Xi as they did to Xi’s meetings with Trump last year, with an unusually long 14-minute report of what Xi and Kim discussed and where and how they met, though the initial secrecy of the trip meant no live coverage of the welcome ceremony.

The images showed the two men chatting in a friendly way, and Xi’s wife Peng Liyuan also greeting Kim’s wife, Ri Sol Ju. Kim and Ri were shown waving out of a window as their car drew away.

In making the trip to Beijing in the customized train, Kim sought to highlight his place as the heir to his father Kim Jong Il, said Aidan Foster-Carter, an honorary senior research fellow at Britain’s Leeds University. His father had also gone to China by train on his visits.

“Ordinary mortals just take the plane,” he said. “The train sets the precedent of following in daddy’s footsteps.”

But by making his wife a key figure in the Beijing trip, Kim parted from his father’s behavior and mirrored the ways of today’s modern country leaders.

Kim Jong Il had never been seen abroad with any of his wives, though he was believed to have been accompanied by the woman suspected of being his fourth wife on visits to China and Russia, yet it was never announced officially.

“Unlike his father, Kim Jong Un presented Ri Sol Ju as first lady of North Korea, emphasizing her status and portraying his image as a normal leader,” said Dongkuk University’s Kim. “It appears to be a well-calculated tactic that would help turn Kim’s hostile and unfavorable image to a gentle and sane one.”

LEGITIMACY AT HOME AND ABROAD

As the leader of a country often called reclusive and strange, Kim is also much younger than many world leaders, a difference that gets additional resonance in Asia, where respectful deference to elders is widely upheld.

Frosty relations between Beijing and Pyongyang since Kim took office had seen state-to-state relations deteriorate, but the two sides have always maintained party-to-party ceremonies and traditions, such as sending envoys to share the outcomes of key party meetings, according to diplomats.

Kim officially cast his visit in the same light, saying he felt obligated to come congratulate Xi in person on his recent re-appointment as president, according to the Chinese Foreign Ministry’s account of the trip.

China’s most senior party diplomat, Politburo member Yang Jiechi, attended the main meeting between Xi and Kim, along with Wang Huning, the party’s top theoretician. The government’s top diplomat, State Councillor Wang Yi, was also there, though at the far end of the table.

Taking nearly all of his closest aides highlights the confidence he may be feeling now that he has secured his position, showing that he doesn’t fear there could be a coup against him during his time away, said Yang Moo-jin, professor at the University of North Korean Studies in Seoul.

“We saw many high-ranking officials with Kim, but almost none from the military. One could worry about a military coup, but the fact that he made this trip as he did shows he’s completely in charge of the military as well as all of North Korea’s internal networks,” Yang said.
#North Korea's Kim seen building global status in trip to China #North Korea’s leader Kim Jong Un #China-Norh Korea
You May Also like: