NEW DELHI: As India braces for a hotter than usual summer, many cities in the country's north are reeling under an intense heatwave with the temperatures on Wednesday crossing a scorching 45 degrees Celsius (113 degrees Fahrenheit). The temperatures in northern India are the highest that the country has seen in decades for this time of the year, and the hot spell is projected to last until Friday. On Tuesday, Rajasthan's Churu district recorded a maximum temperature of 50 C (122 F). Ravindra Sihag, a scientist at the Indian Meteorological Department, said it was the highest temperature recorded in the world for the day. 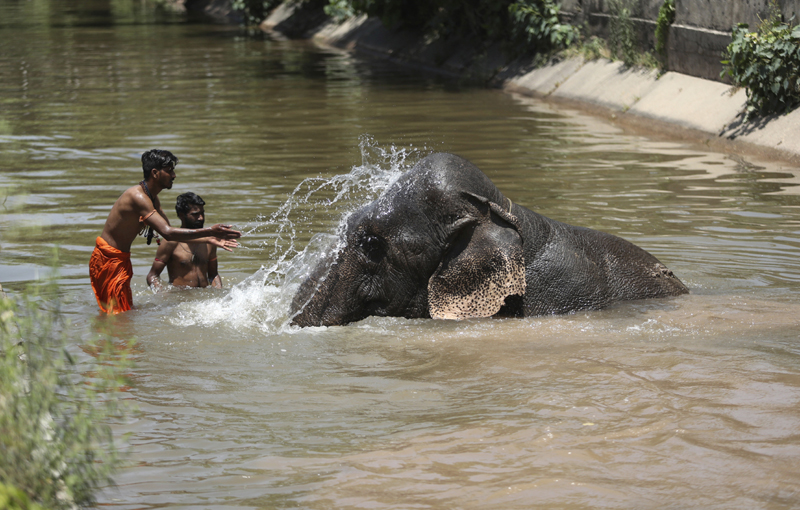 Mahouts bathe a domestic elephant on a summer day in Jammu, India, Tuesday, May 26, 2020. Photo: AP
Temperatures in the capital of New Delhi have also soared beyond 47 C (116 F) this week and some states issued advisories urging people to remain indoors and hydrated. Cyclone Amphan, which left a trail of destruction in the eastern coastal states of West Bengal and Odisha last week, was partly a reason for the heatwave. Mrutyunjay Mohapatra, India's meteorological chief, said that the cyclone effectively sucked the moisture in the air and triggered hot dry winds that are now blowing over large swathes of northern and central Indian plains. India's weather agency is expecting the seasonal average maximum temperatures to remain half a degree to 1 degree C (32.9 to 33.8 F) higher than usual over northwest India and the country's western peninsular region during April and June this year. The main summer months — April, May and June — are always excruciatingly hot in most parts of India before monsoon rains bring cooler temperatures. The monsoon normally hits southern India in the first week of June and the rest of the nation within a month. In recent years, heat waves have caused a number of deaths, including daily wage workers, rickshaw drivers, street vendors and homeless, many of whom are the most exposed to the sun. The year 2015 saw the worst heat wave in India since 1992, killing at least 2,081 people. During spells of heat waves, the country of 1.3 billion people usually suffers from severe water shortages with tens of millions lacking running water. Last year, India's Chennai made headlines when the southern city ran out of water.
#heatwave #Indian Meteorological Department #Rajasthan #India heatwave
You May Also like: