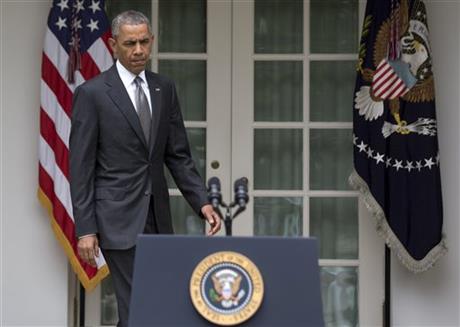 President Barack Obama arrives in the Rose Garden of the White House in Washington, Thursday, June 25, 2015, to speak after the Supreme Court upheld the subsidies for customers in states that do not operate their own exchanges under President Barack Obama's Affordable Care Act. AP
WASHINGTON: President Barack Obama is aiming to change the conversation around his health care law from talk about undoing it to talk of how to make it better. Obama was headed to the Nashville, Tennessee-area on Wednesday to discuss ways to improve the Affordable Care Act, including by extending Medicaid coverage to more low-income people. Tennessee is among about 20 states that have rejected Obama's offer of billions of dollars to help pay to expand the federal-state health care program for the poor. Most of the states are led by Republican governors and Obama has blamed political motivation for their actions. Obama wants to change the conversation after the US Supreme Court last week turned away a major challenge that would have endangered the law along with health insurance for millions of Americans. In a 6-3 decision, the justices upheld federal financial aid to millions of low- and middle-income Americans to help pay for insurance premiums regardless of where they live. Obama declared after the ruling that the law is "here to stay." He cited progress under its provisions, but said "we've still got work to do to make health care in America even better," including by helping consumers make informed choices about their medical care, increasing the use of preventive care, improving the quality of hospital care and reducing costs. Just over 80 percent of people under age 65 had health insurance when Obama enacted the law in 2010. Since then, the share has risen to about 90 percent. The administration would like to boost health care enrollment even further by helping the remaining uninsured get coverage. But achieving the goal largely depends on the roughly 20 states, including some heavily populated ones like Florida and Texas, which have refused the significant financial incentive to expand Medicaid. Obama has said in recent days that convincing these holdout governors will be important. "I'm going to work as hard as I can to convince more governors and state legislatures to take advantage of the law, put politics aside, and expand Medicaid and cover their citizens," he said last week. "We've still got states out there that, for political reasons, are not covering millions of people that they could be covering, despite the fact that the federal government is picking up the tab." Next year is the final year that Washington will offer full federal funding to states to pay for the expansion. After 2016, the federal share will begin to gradually decline, and that will leave states with expanded Medicaid programs responsible for picking up more of the costs. Republicans lawmakers said the Supreme Court decision doesn't change the fact that the law is flawed and should be repealed. No Republicans voted for the law in 2010. "We will continue our efforts to repeal the law and replace it," House Speaker John Boehner, R-Ohio, said last week. Tennessee Gov. Bill Haslam, a Republican, supports extending Medicaid coverage to 280,000 low-income state residents, but a proposal he put forward failed during a special session of the Republican-controlled Legislature earlier this year. The proposal was revived during the subsequent regular session, but failed to clear a state Senate committee. Tennessee US Rep. Jim Cooper, a Democrat, is among state officials calling on state lawmakers to reconsider Haslam's plan in light of the US Supreme Court ruling.
#US President Barack Obama #health care law
You May Also like: