Obama urges 'blood brother' Britain not to leave the EU 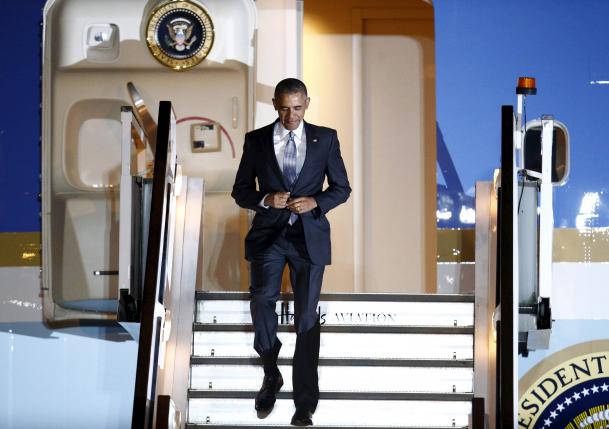 US President Barack Obama walks down the steps of Air Force One as he arrives at Stansted Airport near London, Britain, April 21, 2016. REUTERS
LONDON: US President Barack Obama made an impassioned appeal on Friday for Britain to remain in the European Union, saying membership had magnified Britain's place in the world and made the bloc stronger and more outward looking. Fearful that a British exit could weaken the West, Obama arrived in London to tell Britons that issues such as terrorism, migration and economic slowdowns could be tackled more successfully with the UK in the EU. In approaching such a divisive issue, he invoked the interlinked history of the two countries and the tens of thousands of Americans lying in European war graves as his reason for speaking as "a friend" on the June 23 referendum. "The European Union doesn't moderate British influence - it magnifies it," he wrote in the Daily Telegraph newspaper. "The United States sees how your powerful voice in Europe ensures that Europe takes a strong stance in the world, and keeps the EU open, outward looking, and closely linked to its allies on the other side of the Atlantic". Obama is scheduled to have lunch on Friday at Windsor Castle with Queen Elizabeth, who celebrated her 90th birthday on Thursday, and her husband Prince Philip. He is scheduled to hold talks after lunch with Prime Minister David Cameron. Obama's visit is a welcome one for Cameron, who is leading the "In" campaign, but it has drawn scorn from those arguing that Britain should leave the bloc. Opinion polls indicated that British voters are leaning towards the "In" camp, but many remain undecided. The US government, and many US banks and other companies, fear a Brexit would cause market turmoil, diminish the clout of its strongest European ally, undermine London's global financial hub status, cripple the EU and weaken Western security. "Now is a time for friends and allies to stick together," he said, adding that ultimately the referendum was a matter for British voters to decide. The comments will be welcomed by Cameron who has said that this is no time for Britain to drop out of the club it joined in 1973, especially in the face of what he terms Russian President Vladimir Putin's aggression. Asked about Obama's views, Cameron had previously told the parliament, "Personally I believe we should listen to advice from friends and other countries and I struggle to find the leader of any friendly country who thinks we should leave." Ahead of a 2014 Scottish vote on independence, Obama said he hoped Britain "remains strong, robust and united", a comment that was welcomed by unionist politicians in London. "BUTT OUT" For Britain's closest ally, EU membership amplifies British influence, facilitates trade for US companies and strengthens the 28-member bloc that Washington views as a pillar of stability in the post-World War Two era. Opponents of the EU, many of whom laud the US alliance, have said that membership has shackled Britain to the corpse of a failed German-dominated experiment in European integration, and that Britain, if freed, could prosper as a sole trader. "Out" campaigners have said the United States would never agree to dilute its own national sovereignty in the way the EU requires of its member states. New York-born Boris Johnson, the London mayor who heads the "Out" campaign, said he did not want to be lectured by Americans about EU membership and called the President's stance "downright hypocritical". "For the United States to tell us in the UK that we must surrender control of so much of our democracy – it is a breathtaking example of the principle of do-as-I-say-but-not-as-I-do," he wrote in the Sun newspaper. Nigel Farage, another prominent opponent of EU membership, told Reuters that President Obama should "butt out". "This is an unwelcome interference from the most anti-British American president there has ever been. Mercifully, he won't be in office for much longer."
#European Union #britain #Barack Obama
You May Also like: