Pak close in on Taliban leader 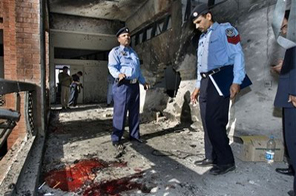 PARACHINAR: Pakistani soldiers fighting inside the hometown of the Pakistani Taliban leader gained ground Wednesday as they pressed ahead with a major offensive on a militant sanctuary close to the Afghan border, intelligence officials said.
The advances came as intelligence officials said suspected U.S. missiles killed three alleged militants in a neighboring region where the army has tried to convince other insurgent factions to stay neutral during the military assault in South Waziristan.
The five-day-old offensive is considered a critical test of the nuclear-armed country's often-criticized campaign against Islamist extremists blamed for soaring attacks at home and on Western forces in neighboring Afghanistan.
Troops had secured parts of Kotkai town and destroyed the home of Pakistani Taliban chief Hakimullah Mehsud by Wednedsay, but battles were ongoing, two officials told The Associated Press on condition of anonymity because they were not authorized to speak to the media.
On Tuesday, twin suicide bombings killed six people at Islamabad's International Islamic University in apparent retaliation for the offensive. All educational institutions in the country were closed Wednesday, showing the militants' ability to disrupt daily life.
The military is advancing on three fronts in South Waziristan. The fight for Kotkai is symbolically important because Hakimullah Mehsud and a top deputy, Qari Hussain, hail from there. It also lies on the way to another the militant stronghold of Sararogha.
Army spokesmen were not available for comment on the fighting in the town. On Tuesday, militant fighters said they had repelled an army assault on it, and a military spokesman denied a media report that soldiers had retaken it.
The missile strikes Wednesday hit Spalaga, a village in North Waziristan tribal region. Two other intelligence officials said three suspected insurgents were killed, but that the number could rise. They declined to be named because they also were not authorized to speak to media on the record.
The U.S. has launched scores of missiles in South and North Waziristan over the past year, including one that killed former Pakistani Taliban chief Baitullah Mehsud in August.
The latest strike, however, comes at a sensitive time because the army is counting on insurgent groups in North Waziristan staying neutral as it fights Mehsud's faction in South Waziristan. The missile strikes could stir anger among those militants, straining the deals with the army.
Pakistan routinely condemns the missile strikes as violations of its sovereignty, but many observers suspect the two countries have a deal allowing the drone-fired attacks.
It is nearly impossible to independently verify information coming from South Waziristan because the army has closed off all roads to the region. Analysts say both sides have exaggerated successes and downplayed loses in the past.
Chief military spokesman Maj. Gen. Athar Abbas cautioned that the fight in South Waziristan could be long.
"This is a mountainous terrain and therefore the operations tend to be slow," Abbas told the AP in an interview Tuesday. The militants "are very tough fighters. They know the area, terrain. And they are very determined to fight."
Abbas said the military believed that Hakimullah Mehsud and Qari Hussain remain in the region under fire, directing the militants' defenses. That information is based on local informants and communications intercepts, Abbas said.
The army claims to have killed some 90 militants and to have lost 13 soldiers in the offensive so far.

#Pak close in on Taliban leader
You May Also like: