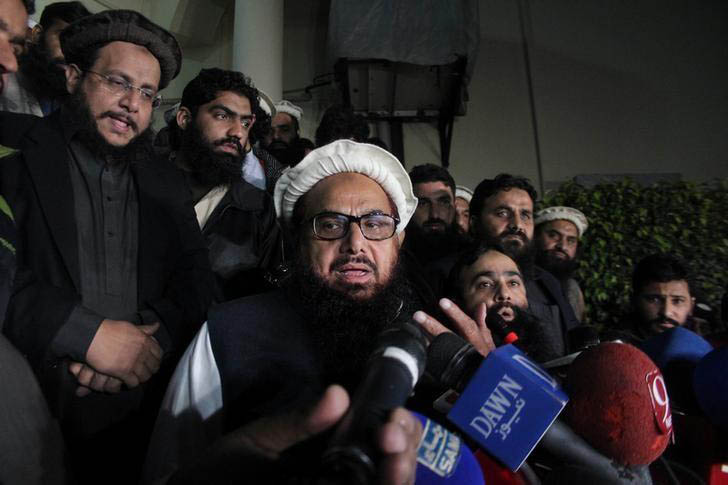 Hafiz Muhammad Saeed, chief of the banned Islamic charity Jamat-ud-Dawa, speaks with media as he is escorted to his home where he will be under house arrest in Lahore, Pakistan January 30, 2017. Photo: Reuters
LAHORE: Pakistan has extended by three months the house arrest of Hafiz Saeed, accused by the United States of masterminding the 2008 attacks on the Indian financial capital Mumbai that killed 166 people, a Pakistani official said on Monday. Saeed was placed under house arrest in January after years of living free in Pakistan, a sore point in the relationship between the United States and Pakistan. His freedom had also infuriated Islamabad's arch-foe India. The U.S. had offered $10 million for information leading to the arrest and conviction of Saeed, who heads the Muslim charity Jamaat-ud-Dawa (JuD). Washington says JuD is a front for the Pakistan-based militant group Lashkar-e-Taiba (LeT). Malik Muhammad Ahmed Khan, a spokesman for the provincial Punjab government, said the regional administration decided on Sunday to extent the restrictions on Saeed, but did not specify the reasons why. "Hafiz Saeed's house arrest, which ended Sunday night, has been extended for another three months," Khan said. Saeed could not be reached for comment. The Mumbai attacks in 2008, when 10 gunmen swarmed across targets including two luxury hotels, a Jewish center and a train station in a rampage that lasted several days, brought Pakistan and India to the brink of war. India accused Pakistan of sponsoring the attacks through LeT, which Saeed founded in the 1990s. Pakistan has denied any state involvement and Saeed - who has distanced himself from LeT - has said repeatedly he was not responsible. Previous Pakistani announcements of action against anti-India militant groups have rarely led to serious punishments for them. Western countries have for decades accused Pakistan of harboring Islamist militant groups and using them as proxies against bigger neighbor India, with whom it has fought three wars since independence. Islamabad denies having such a policy.
#Pakistan #India #Hafiz Saeed #mumbai attack #Hafiz Muhammad Saeed
You May Also like: