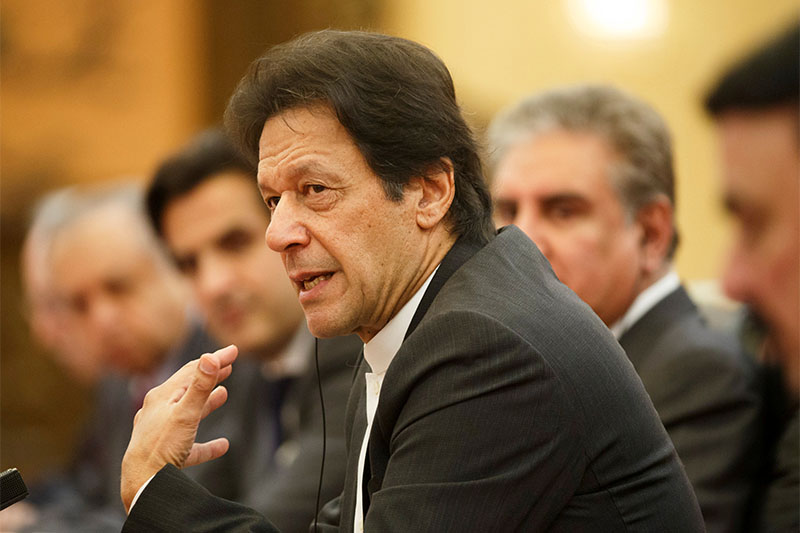 FILE PHOTO: Pakistani Prime Minister Imran Khan attends talks at the Great Hall of the People in Beijing, November 2, 2018. Photo: Reuters
ISLAMABAD: Pakistani Prime Minister Imran Khan said on Friday that he would not hesitate to make more changes to his cabinet if required a day after a major reshuffle that saw the appointment of a new finance minister and nine other ministerial switches. The cabinet shakeup, which comes eight months after Khan took office, included the replacement of Finance Minister Asad Umar, who has been a close ally to Khan for many years, with Abdul Hafeez Shaikh in a renamed role to steer the country out of worsening economic turmoil. Pakistan is on the brink of signing up for its 13th International Monetary Fund (IMF) bailout since the late 1980s in a bid to stave off a balance of payments crisis and ease ballooning current account and fiscal deficits. "I want to tell all my ministers that whoever is not useful for my country, I will change them and bring that minister who is useful for my country," Khan said during a speech in the northern region of Orakzai. Shaikh, who served as finance minister from 2010-2013 under the opposition Pakistan People's Party when it was in power, has been appointed as "Adviser on Finance" but will be heading the finance ministry once again. In Pakistan' it is common for financial experts to be given the title of "adviser", rather than federal minister, to head the finance ministry when they are not a sitting member of parliament. Umar has been leading negotiations with the IMF but faced criticism over a worsening economic outlook on his watch, with inflation at a five-year high and the rupee currency down about 35 percent since December 2017. The central bank last month cut growth estimates, forecasting the economy to expand 3.5 to 4 percent in the 12 months to the end of June, well short of a government target of 6.2 percent. The IMF paints a gloomier picture, predicting growth of 2.9 percent in 2019 and 2.8 percent next year. In a speech laden with cricket metaphors, Khan, who led Pakistan's cricket team to World Cup triumph in 1992, said such changes were part of good leadership. "The captain has one objective and that is to get the team to win. The prime minister also has one objective and I have only one objective, to help my people win, to help them rise," he said. "For this, I have the changed the batting order in my team and I will do this again in the future."
#Pakistan's Imran Khan
You May Also like: