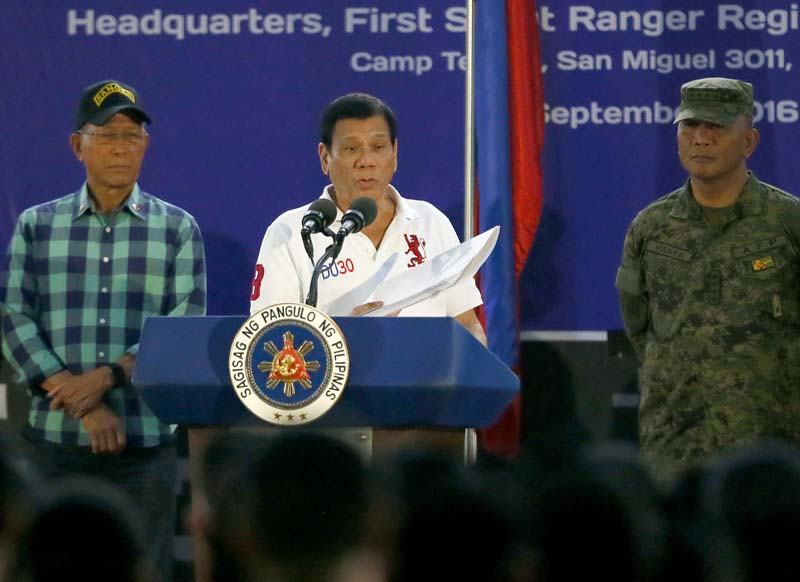 File- Philippine President Rodrigo Duterte holds a folder containing the names of Philippine politicians and government officials allegedly involved in illegal drugs during his visit to the headquarters of the Philippine Army Scout Rangers at Camp Tecson in San Miguel township, north of Manila, Philippines, on September 15, 2016. Photo: AP
MANILA: An independent poll released Thursday showed that more than three-quarters of Filipinos are satisfied with President Rodrigo Duterte, even though he is under fire internationally for his deadly crackdown on suspected drug dealers and users.
The survey, conducted by Social Weather Stations from September 24 to September 27 and published Thursday, shows 76 percent of 1,200 adults polled nationwide were satisfied with Duterte's performance, 11 percent were dissatisfied, and 13 percent were undecided. There was a national sampling error margin of plus or minus 3 percent. The poll comes nearly three months after Duterte took office and with his anti-drug crackdown, which has left more than 3,600 suspected drug dealers and pushers dead, raising alarms at the United Nations, the EU, the US and human rights watchdogs. The brash-speaking leader has been hypersensitive to such criticism, and the latest survey was carried out just before he raised the rhetoric on September 30, comparing his anti-drug campaign to Hitler and the Holocaust and saying he would be "happy to slaughter" an estimated 3 million Filipino addicts — a remark he has since apologized for. He has unleashed a number of expletive-laced tirades against his critics, telling President Barack Obama "you can go to hell," and saying he may eventually decide to "break up with America." He has also lashed out at the European Union and the UN. The survey showed respondents in the southern Philippine region of Mindanao, where Duterte is from, gave him the highest rating, with 88 percent satisfied, and just 4 percent not satisfied.