Putin's Japan visit could be firmed up at Abe meeting 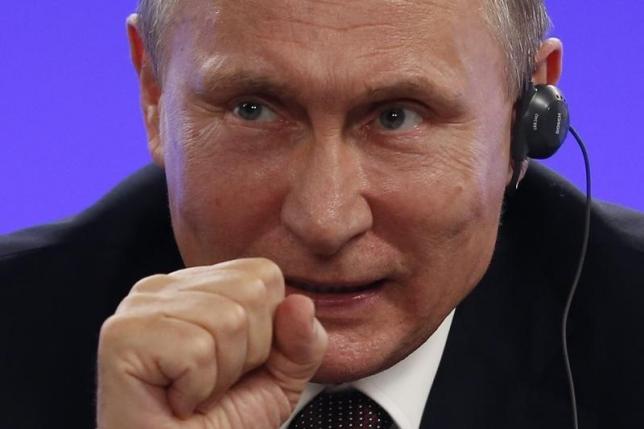 Russian President Vladimir Putin attends a news conference in St. Petersburg, Russia, June 17, 2016. REUTERS/Grigory Dukor
TOKYO: The schedule for a visit to Japan by Russian President Vladimir Putin could be decided when Prime Minister Shinzo Abe meets Putin later this week, Japan's top government spokesman told Reuters on Tuesday. Abe is expected to meet Putin on the sidelines of a Sept. 2-3 Eastern Economic Forum business conference in the port city of Vladivostok. He has travelled to Russia several times and met Putin since taking office in December 2012 but the Russian leader has not been to Japan during that time. The schedule for Putin's visit "has not been decided. The leaders will meet and in that context, the schedule will probably be firmed up", Suga said. Japan has been eyeing closer ties with Russia to counter China's growing clout and from interest in its natural energy resources, but earlier attempts to schedule a visit by Putin were derailed by Russia's 2014 annexation of Ukraine's Crimea region, which prompted Tokyo to join other Western countries including the United STates in imposing sanctions on Moscow. A dispute over four sparsely populated islands in the Pacific, known as the Northern Territories in Japan and the Southern Kuriles in Russia, has prevented the countries from signing a peace treaty ending World War Two. The islands were seized by the Soviet Union after it declared war on Japan on August 8, 1945, just days before Japan surrendered. They are near rich fishing grounds and close to oil and gas production regions of Russia. Suga also said a so-called "new approach" to Japan-Russia relations was to focus on economic issues. He sidestepped a question as to whether Japan could accept a compromise in which all four islands were not returned to Japan, saying only that the guestion of the four islands must be "made clear". Abe last met Putin at the Russian president's Black Sea residence in Sochi and has said he hopes to invite him to his home constituency of Yamaguchi prefecture in southern Japan during a visit that could take place by the end of this year. Suga also said nothing had been decided yet about a meeting between Abe and Chinese President Xi Jinping on the sidelines of a Group of 20 (G20) summit in China on Sept. 4-5.
#Russia #Japan #Russian President Vladimir Putin #Japanese Prime Minister Shinzo Abe #Prime Minister Shinzo Abe #putin #Abe #Japan-Russia
You May Also like: