Regent to stand in as grieving Thailand awaits new king 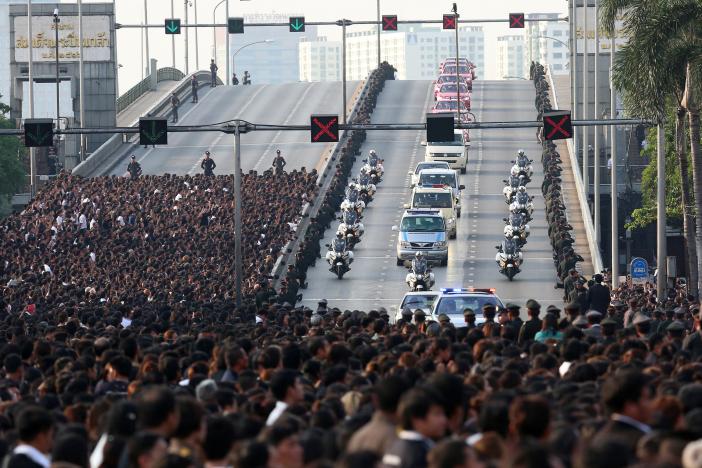 A motorcade carrying the body of Thailand's late King Bhumibol Adulyadej makes its way from the hospital to the the Grand Palace in Bangkok, Thailand October 14, 2016. REUTERS

The head of Thailand's royal advisory council will stand in as regent while the country grieves over the death of King Bhumibol Adulyadej and awaits for his son to formally succeed him, the government said.

Mourners lit candles and recited prayers before dawn on Saturday outside Bangkok's riverside Grand Palace, where the remains of the king will lie for months before a traditional royal cremation.

The world's longest-reigning monarch, King Bhumibol died on Thursday in a Bangkok hospital, at the age of 88.

The government has said Crown Prince Maha Vajiralongkorn wants to grieve with the people and leave the formal succession until later, when parliament will invite him to ascend the throne.

Deputy Prime Minister Wissanu Krea-ngam said in an interview broadcast on state television late on Friday that there was no uncertainty about the succession but, in the interim, the head of the powerful Privy Council would have to step in as regent.

"There must be a regent for the time being in order not to create a gap," Wissanu said. "Even though there is no problem, because we have a clear answer, the head of the privy council must be regent temporarily."

"This situation will not be used for long," he added, without mentioning by name Privy Council head 96-year-old Prem Tinsulanonda, a former army chief and prime minister.

Prince Vajiralongkorn does not enjoy the same adoration his father earned over a lifetime on the throne. He has married and divorced three times, and has spent much of his life outside Thailand, often in Germany.

The king's remains were taken in a convoy on Friday through Bangkok's ancient quarter to the Grand Palace, winding past thousands of Thais dressed in black, many of them holding aloft portraits of a monarch who was worshipped as a father figure.

Buddhist monks chanted prayers beside his coffin on Saturday as Princess Maha Chakri Sirindhorn came to pay her respects.

Hundreds of people gathered outside the palace during the morning and some who had arrived before dawn lit candles.

"I didn't ever want to hear this news although it couldn't be avoided. All we can do now is hope that he will rest in peace," said Sakhon Sondee from the eastern province of Surin.

The king had been in poor health the past several years and his death plunged the Southeast Asian nation of 67 million people into grief.

Most Thais have known no other monarch and King Bhumibol's picture is hung in almost every house, school and office.

People in the capital and in towns across the country dressed in black. The government has decreed that no festivities be held for a period of 30 days, the first month of one year of official mourning, but shopping malls were open on Saturday.

The Nation newspaper said government guidelines for the media stipulated that TV programmes and advertising "must not contain improper scenes such as entertaining, dancing or violent acts", and presenters must dress in white or black.

It said information related to the king's passing must be approved by authorised bodies, while criticism or analysis would not be allowed.

Thailand's strict lese-majeste laws, which have been applied rigorously since a military government took power in a 2014 coup, have left little room for public discussion about the succession.

"While CPJ sympathises with the Thai people over the passing of King Bhumibol Adulyadej, we lament that the government has resorted to crude censorship at this sensitive time," said Steven Butler, CPJ's Asia programme coordinator.

The king stepped in to calm crises on several occasions during his reign and many Thais worry about a future without him. The military has for decades invoked its duty to defend the monarchy to justify its intervention in politics.

Military government leader Prime Minister Prayuth Chan-ocha said after the king's death that security was his top priority and he ordered extra troops deployed around the country.

Thailand has endured bomb attacks and economic worries recently while rivalry simmers between the military-led establishment and populist political forces after a decade of turmoil including two coups and deadly protests.

The junta has promised an election next year and pushed through a constitution to ensure its oversight of civilian governments. It looks firmly in control for a royal transition.

#Thailand #Bangkok #Bhumibol Adulyadej #Maha Vajiralongkorn
You May Also like: